I've finished up four more garments for the Ottobre Fall SWAP (sewing with a plan).  I'm really pleased with how wonderfully this whole sewing plan is going!  I've done most of the "easy" garments and am starting in on some of the more complex items. 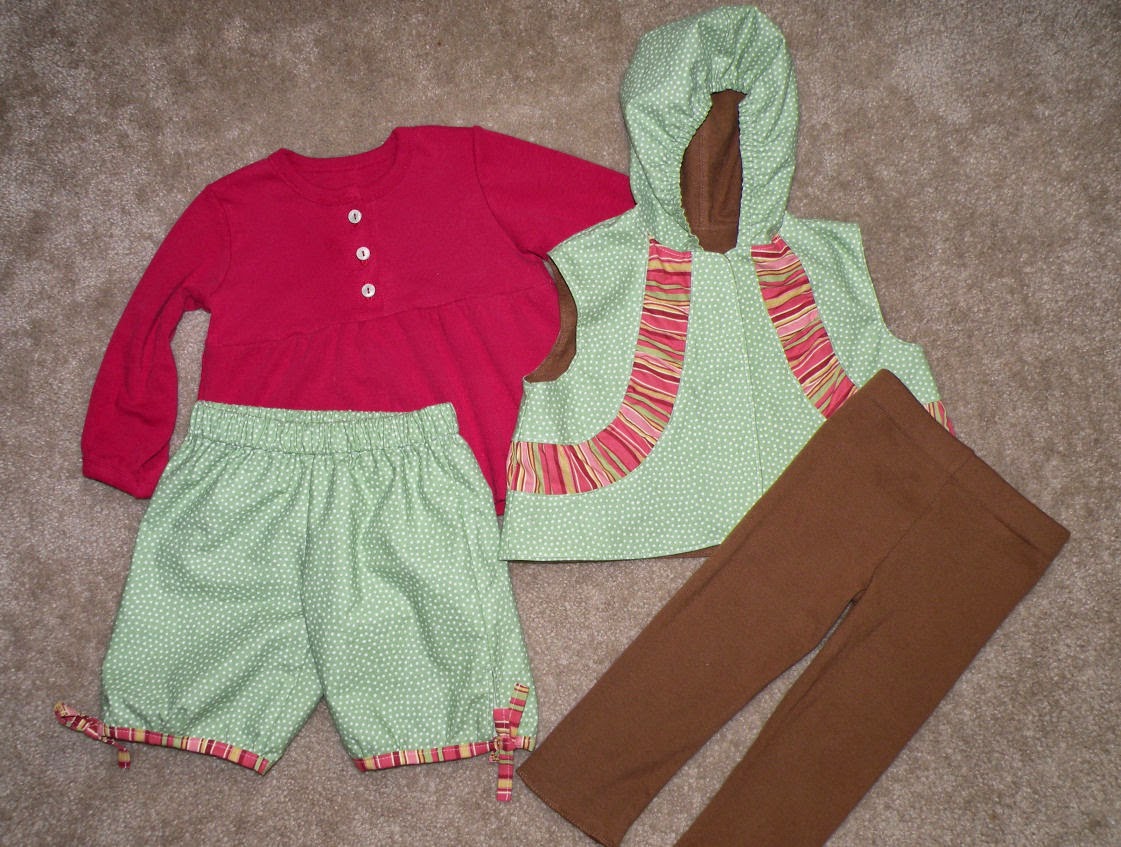 The fabric I used in the Muru tunic (Ottobre 1/2009 #6) was taken from an old t-shirt cardigan of mine that magically grew shorter and shorter on me.  I even re-used the ribbing and buttons.  I swear, I had a bad case of preggo brain when sewing it because I must have ripped out every seam at least once. It wasn't the pattern, just me.  In fact, the pattern was really quite simple and I enjoyed making it!  I nixed the whole clear elastic thing though 'cause the knit was so tender and the elastic so stiff...it just wasn't working.  I gathered it with old fashioned basting threads.  I'm not sure if I'll try the clear elastic again next time I make this pattern; it will probably depend on how sturdy the fabric is.

I haven't decided how to fasten the Ladybug vest (Ottobre 1/2008 #5).  I would eventually like to invest in a snap press, so I may go ahead and do that now, or I may just do buttons. I was even thinking of doing some sort of toggle-button closure. Any suggestions?  I think it's kind of funny that it's made of green polka-dotted fabric in the magazine and I ended up making it out of green polka-dotted fabric. I originally thought about making it out of polar fleece (no contrast panel, of course), but the green polka-dot twill just insisted this is what it wanted to be made into.  Who am I to say no to strong-willed fabric?

I made the Candy pants (Ottobre 1/2008 #9) once before and knew I liked them. I used cheap calico then and they wore thin in the back pretty quickly. I'm sure this twill will stay nice much longer and be warmer for fall.  I tried them on Miss M before turning down the waistband since I had a feeling I'd need to turn them down a bit more than called for to keep the crotch from hanging too low. I'm glad I did. I ended up almost doubling the amount I turned them down and am very pleased with the way they fit her.

The leggings are my own pattern.  I made them just a bit too long on purpose 'cause I know a growth spurt between now and spring is inevitable.  Since they're made of rib knit, I also made the front and back identical. The ribbing stretches enough in the back to fit properly and isn't too loose in the front. That way Miss M can dress herself without getting them on backwards.  I'll definitely be making more of these.  They're so easy, so comfy, and so versatile! 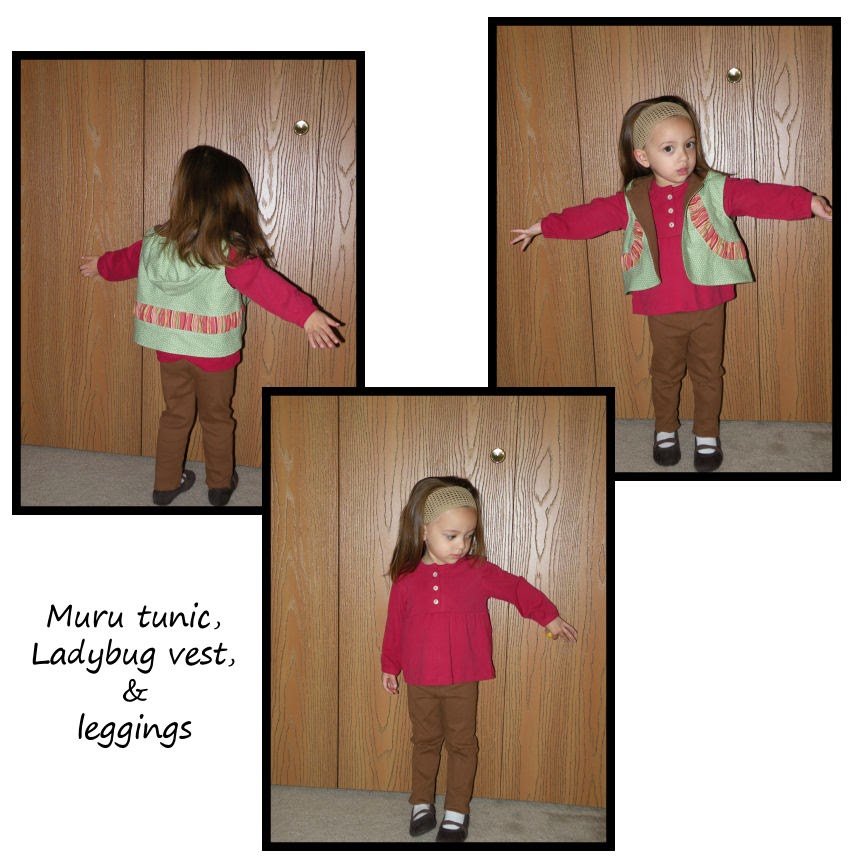 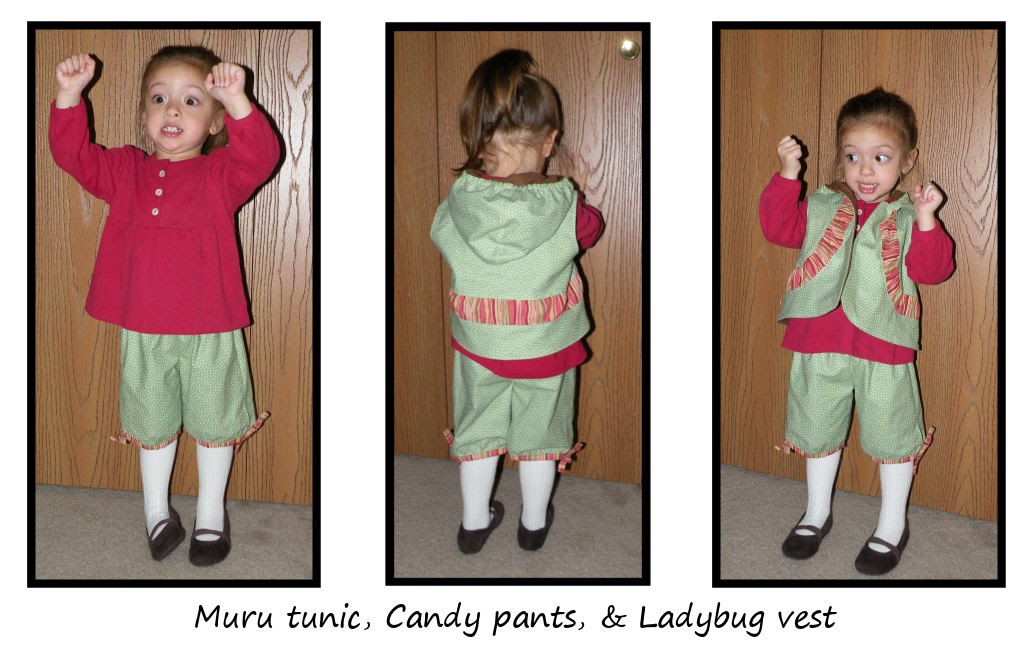 Miss M's grandma and auntie bought her this pair of brown shoes -- they  haven't even seen her fall wardrobe plan yet!  Aren't they perfect? A little more casual than the ones I bought...which is perfect and between the two pairs she should be all set for fall and spring. She may need some boots of some sort for winter though.  Not that I mind...shopping for cute boots will be great fun! Tee hee!

Here is my current SWAP plan, and the other garments I've completed so far.  Next I'm making the Pink Daisy overalls (Ottobre 4/2009 #8) as a dress rather than pants.  Do you think I should keep the pockets on the back, or just the front ones?
Posted by Christephi at 6:56 AM