I finished my SWAP according to the September 21st deadline and am just now finally getting around to posting the complete ensemble here.  I really enjoyed the entire process.  It was especially great once everything was cut out because when I had a few minutes to sew, I could sit down, grab something, and sew!  I'll definitely be using this method again in the future. 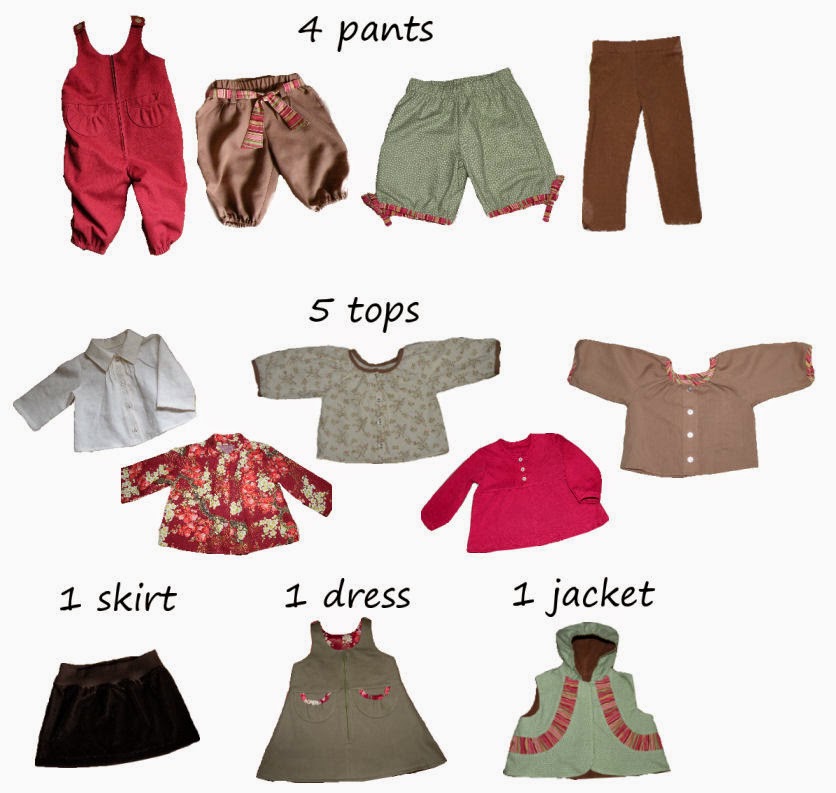 I'm so glad I didn't try to do full length pants (except for the leggings) because Miss M seems to be sprouting up overnight these days.  I had to go out and buy her a package of new socks because her feet are getting too long for her old ones...and I had to get them from the little girl's section, not the baby department!  She's got long and narrow feet like me.

I'd still like to add two pairs of leggings (off-white and dark green) and 2-3 pinafore dresses for layering.  I have fabric already, I just need to do some other sewing first.

Hubby's work had a surprise baby shower for him on Friday.  Going through a bunch of new baby things has made me feel like the new baby's coming is a lot closer.  Right now I'm at 32 weeks and Miss M was born at just over 36 weeks; if this little guy keeps to the same schedule I've got about a month left.  So I'm going to put in some time sewing baby diapers and maybe a few sleep sacks.  Oooh...wanna know what's really scary?  I had a doctor's appointment on Thursday and he specifically instructed me not to get the swine flu vaccine and to stay away from anyone who gets it for the first 2-3 days.  He said that he and his staff won't be getting it, that it's a nasal spray that contains live virus and could be dangerous to pregnant people, and that they don't want to risk exposing their patients to it.  YIPES!  If that isn't enough to make your skin crawl...  And this is something the government wants us to give to our children?  He said I could get the regular flu shot, but I probably won't...I've never had it before and haven't gotten the flu since I was in high school and my immune system was already compromised with mono.  Plus, I'm really not out and around people all that much, so there's not a great chance for exposure.  I am taking a vitamin D supplement since there are some convincing studies out there about it's use in preventing flu.
Posted by Christephi at 11:09 AM