Been wondering where I've been the past few days?  Here's a recap:

Friday - I was pretty sick with a gallbladder attack.  Hubby stayed home from work to help me with the kids and take me to see our family doctor.  She ordered some blood tests and scheduled an ultrasound for Tuesday to look for gallstones.

Saturday morning - Hubby got up with the kids and let me sleep in (which was good 'cause I really didn't sleep much that night due to the pain).  Before I even got up, Hubby brought me the phone.  It was the doctor calling to say that she got the blood test results back and wanted me to get an ultrasound pronto, no waiting until Tuesday.  She pulled a few strings and got me in for one even though it was the weekend (and quite a drive away).  She also put in a call to her favorite surgeon.

Saturday afternoon - I took a nap.  When I got up I was feeling just as bad, if not worse.  The doctor's words came back to me..."listen to your body."  Well, my body was not happy.  I couldn't keep down anything, not even crackers and water.  I figured I could tough it out until Tuesday -- eating practically nothing -- but I didn't want to jeopardize my milk supply or torture myself, so I went to find Hubby so we could go to the hospital.  I could hear Hubby snoring in the living room...and this is what I found! 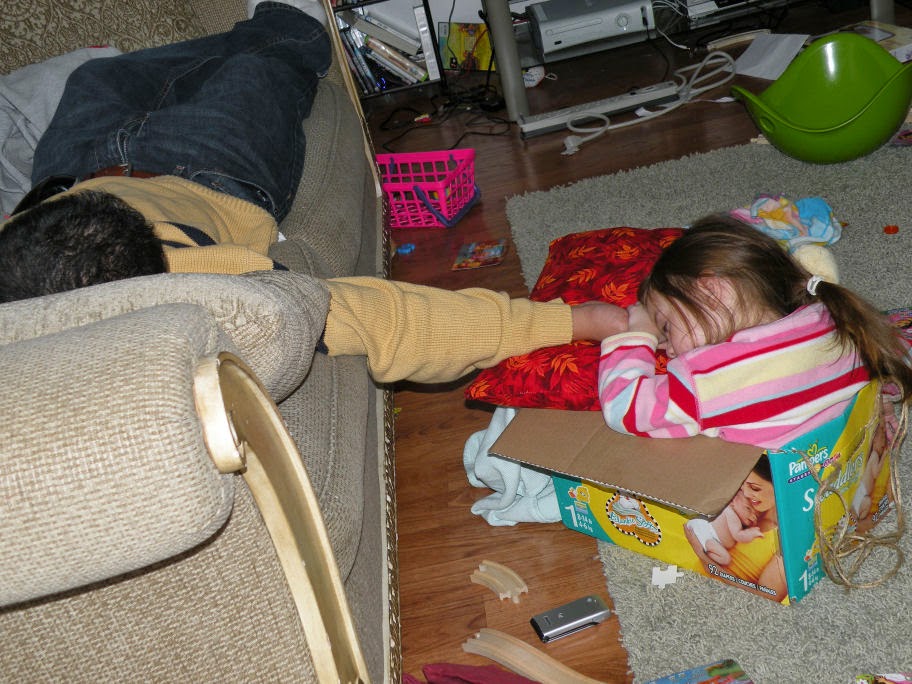 Yes, they were both asleep...and Miss M was in a diaper box!  My jaw literally dropped open when I saw her there!

Saturday night - I took my copies of the ultrasound results with me to the emergency room, but they were unable to read them, so they did some blood tests and ordered another ultrasound.  They couldn't see any gallstones and decided to send me home once the rest of the blood test results were in.  But that was not to be.  The blood tests showed that my liver enzymes were a complete mess, so I was admitted to the hospital at once.

Sunday - I had a endoscopic retrograde cholangiopancreatography (Look at that word! Isn't it amazing? All 24 letters! Love it!) or ERCP in which they removed four gallstones (I have the pictures and they are not pretty!)  Thank the Lord for the good doctor who was willing to come in on a Sunday to do the procedure...and his wonderful family for allowing him to!  It was the first time I've ever been put to sleep for something...I was a bit nervous, but it turned out to be okay.  And my wonderful Hubby was there for me the whole time.

Monday - I underwent an hour long surgery to remove my gallbladder.  The surgery came off without a hitch and I was able to eat for the first time in days.  Despite my illness, my appetite never went away (blame it on being a nursing mother), so this business of being able to eat again was quite a celebration!

Tuesday - home again, home again!  I missed my babies, but I knew they were in good hands.  I'm a bit sore, but nothing serious.  E-boy was fed with formula for about a day -- I had to pump and dump for a bit due to some of the medications I took -- and he did fine despite being a bit gaseous.  It was hard on Miss M to be shuffled back and forth between sets of grandparents so much, but she too came out none the worse for the wear.  In fact, I think it strengthened her bond with her brother a bit which is a very sweet sight to behold!

I am so thankful to the Lord for arranging willing doctors, kind and knowledgeable nurses, loving grandmas and grandpas, and a truly dedicated husband so that being in the hospital for three days was a positive experience and not a horror.  It wasn't the weekend I envisioned, but it was definitely a memorable one!
Posted by Christephi at 3:01 PM

Email ThisBlogThis!Share to TwitterShare to FacebookShare to Pinterest
Labels: about me/us, health