This was our second week of 1st grade.  We read several poems this week, but our favorites were “White Sheep” and “Secret” from the Lesson Manuel.


White sheep, white sheep
On a blue hill,
When the wind stops
You all stand still.


When the wind blows
You walk away slow
White sheep, white sheep,
Where do you go?


Miss M was quite enchanted by the idea that there could be a meaning other than just what the words say.  Her eyes  lit up and she exclaimed, “That was hard!” 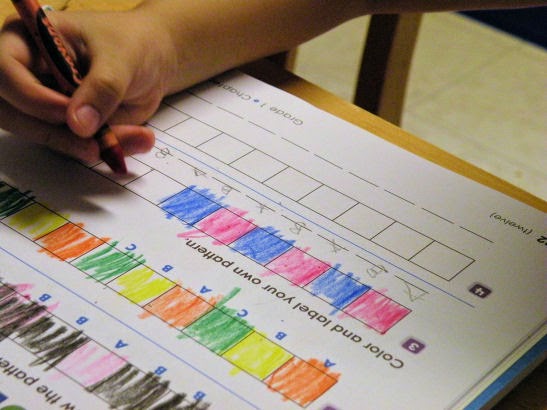 In math she worked on patterns including ABC patterning which she hasn’t formally encountered before. She did well, though if a pattern stopped before completing the set (e.g. ABB ABB AB), it usually threw her off when extending the pattern which I chalked up to lack of attention to detail, rather than lack of understanding of patterns.

She very much enjoyed the Change of Pace exercise: tossing a paper cup and tallying how many times it landed on it’s bottom, side, or top. I appreciated the connection to science since it had us run the experiment twice just like the children do in the science pages we’ve been reading!  Actually, I find Calvert does a marvelous job at connecting ideas across disciplines!  We had Venn diagrams in both math and reading this week and the Scientific Method showed up in both our science and technology lessons. 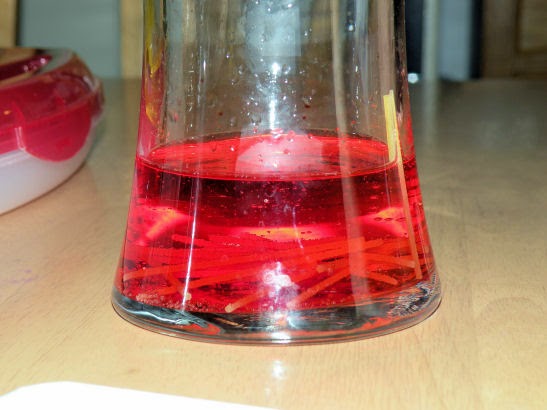 Speaking of science, the floating pasta experiment was a total flop!  Our pasta sank to the bottom and stayed there.  Twice.  Maybe the generic brand club soda I bought wasn’t powerful enough (though it seemed quite fizzy to me).  Miss M didn’t know what to expect and enjoyed the process anyway.  I think the food coloring alone was enough to delight her!  Though we weren’t instructed to, we recorded the question, prediction, and results in her science journal.

Our missing social studies book is supposed to arrive today, so we’ll catch up over the course of the next week. 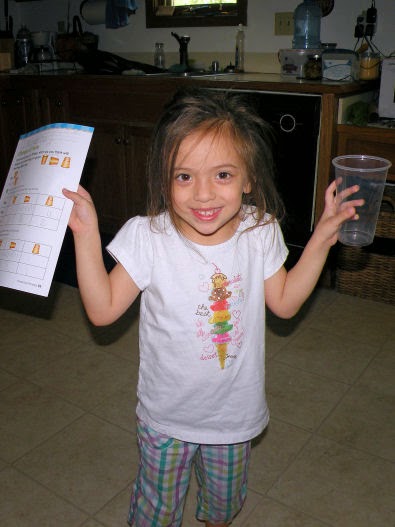 I debated with myself over whether or not to attempt to correct Miss M’s pencil hold. She was resting the pencil on her ring finger and using the first two fingers and thumb to grip the pencil.  I finally decided to try to get her to hold it “correctly.”  To my surprise, she’s been quite willing to attempt the change, although a few times she’s complained that it feels funny or is harder.  Her writing is much sloppier this way, but I’m sure once she gets used to it, that’ll change. I was more concerned with fatigue and writers cramp later on when she needs to write page upon page at a time.  She’s quite proud of herself for learning the “proper” way to do it and eagerly showed off for Daddy when he came home!  She’s also proud of herself for using lowercase letters more, and I’m glad there is some number writing practice in the math lessons because that’s something she needs a good review in. Many of her numbers are typically written backwards.

Miss M loves doing work on the computer. She enjoys the daily Math Checkpoints and her Computer Skills and Applications lessons!  Although she was able to operate a computer better than her lolo before she could even read, at this point I can say with certainty that she knows more about computers than several of her grandparents (who use them nonetheless).

We read about Noah, the Flood, and God’s Promise this week and did some rainbow art. 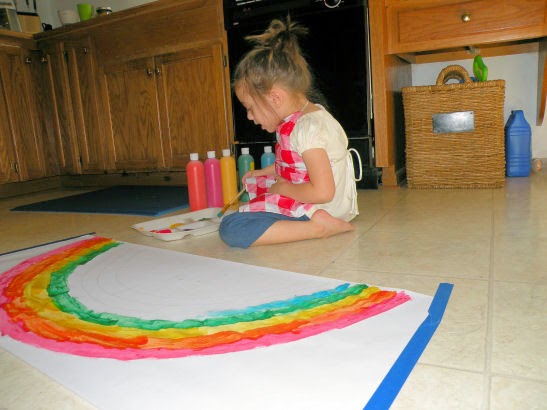 Posted by Christephi at 6:13 AM