We are nearing the end of Calvert 1st grade, so we decided to knock out the last two chapters in our science book with a dedicated Science Week!  On day one we explored position and force.  See also Day 3, Day 4, and Day 5. 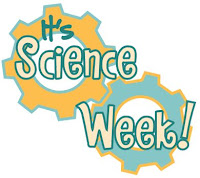 Welcome to our second day of Science Week!  Today we investigated simple machines and magnets.  A simple machine is a tool that can make it easier to move things.

First we tried to lift a textbook with one finger, but it was too heavy!  So we built a simple machine using a marker, a ruler, and some masking tape.

We learned that lever is a bar that balances on a point.  Our ruler became a lever by balancing on the marker.  We were able to lit the heavy textbook with one finger using the help of the lever!

Next Miss M tried to pick up and carry a heavy bottle of vinegar.

So we rigged up a pulley to see if it would make it easier to move the heavy bottle.  A pulley is a rope that moves over a wheel.

We didn't really need to put a gallon of vinegar on top of the bunk bed, so we untied it and tied a basket on instead.  Now Miss M and Little Guy can take turns delivering dollies to the top bunk!  A pulley can make it easier to lift a heavy object; it can also help move things to high places.

We didn't do any hands-on investigations with ramps.  Both kids have seen their 88-year-old great-grandmother being pushed up and down ramps (and sometimes steps!) in her wheelchair many times, so we had a brief discussion about that and moved on.

Our last activity of the day was playing with magnets!  Miss M sorted a pile of office supplies according to what she thought would stick to a magnet and what wouldn't.

Magnetic poles are fun to explore because opposite poles attract, but two of the same poles repel one another.  We had fun chasing magnets around the table -- sometimes they suddenly flip and stick together!

But the best magnet activity of all was comparing two magnets to see which was stronger.  The magnetic wand one by a wide margin.  It picked up half the paper clips at once! 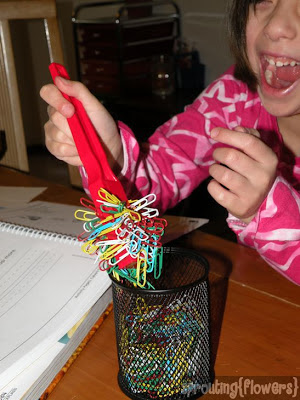 What's your favorite thing to do with magnets? 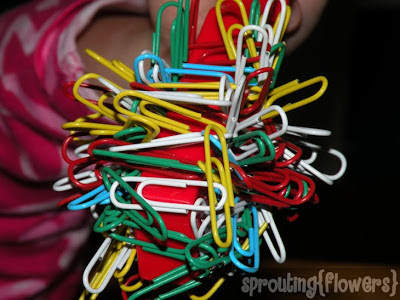 Posted by Christephi at 8:30 AM