My nephew Zaemn is having a birthday today!

It's been quite a while since we've seen him; he lives with his mom in another state.  But we think about him often and speak of him to one another.

Today we're going to eat pie in his honor…and sing "Happy Birthday" too! 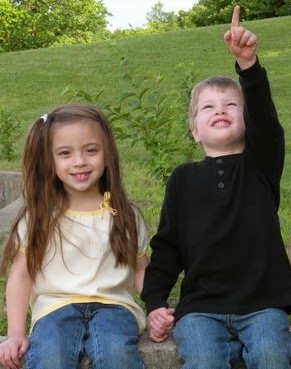 Happy birthday, Zaemn!  We love you and pray for you always!  And we look forward to the day when we will see you again!  Miss M always says she misses you -- you two are best buds!
Posted by Christephi at 8:00 AM No comments:

Part 1 of our first two weeks of ECC can be found here. 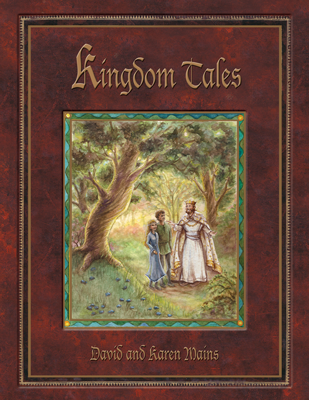 This week we started reading Kingdom Tales and I was immediately floored at how amazing it is! I even went so far as to message my cousin and tell her she has to get her hands on a copy by hook or by crook because I just know she's going to love it as much as I do! (She herself is an author of Christian allegory.)  The kids are enjoying it too and though they're only seven and four, they easily caught onto and understood the symbolism and message of each chapter.

This week in geography was a continuation of basic map skills.  We talked about how cartographers draw scale maps of large landforms and Miss M copied an outline of her hand from 1:1 scale to 1:2 scale.  She did fine, but I think this is definitely an activity better suited for older students. 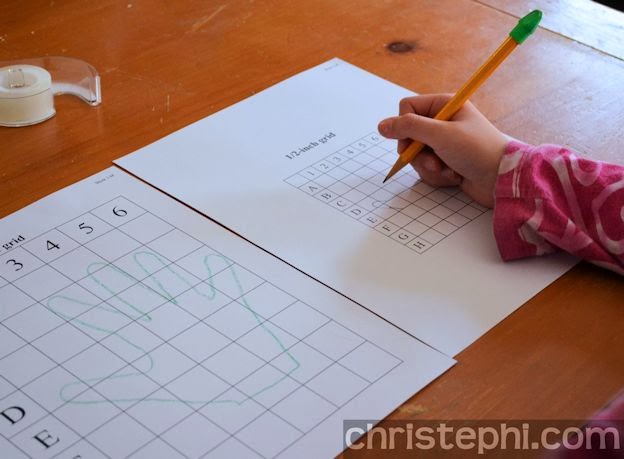 To facilitate our study of map symbols and keys, I pulled up our neighborhood on Google Earth and sketched out the major streets.  Then Miss M filled in the details, labeled it all, and got busy drawing and placing symbols. 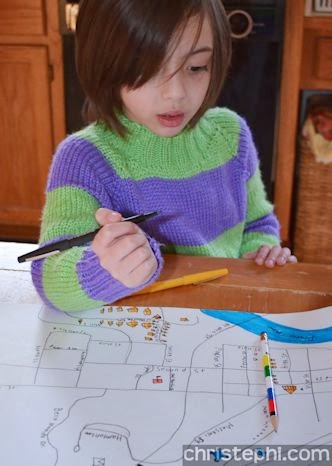 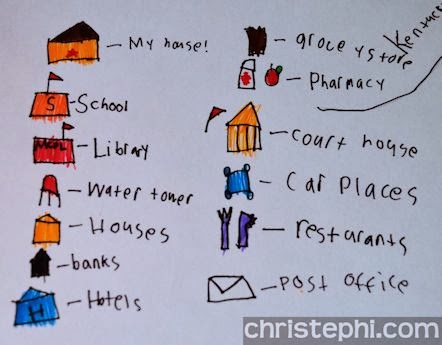 The kids' relationships with each other have blossomed in the past weeks. They are the best of playmates and really enjoy doing everything together.  Even when I set Miss M a task to do alone, she almost invariably invites her little brother to join her.  One of their favorite times each day is Book Basket time.

As a finale to our week, Miss M made a world cake from scratch all. by. herself!  The only thing I did was put it in and out of the oven for her since she can't reach, ration the food coloring drops, and tape little signs to toothpicks. The rest was all her! I'm impressed!!  I'm not a big fan of cake, but any from-scratch cake is usually okay by me! 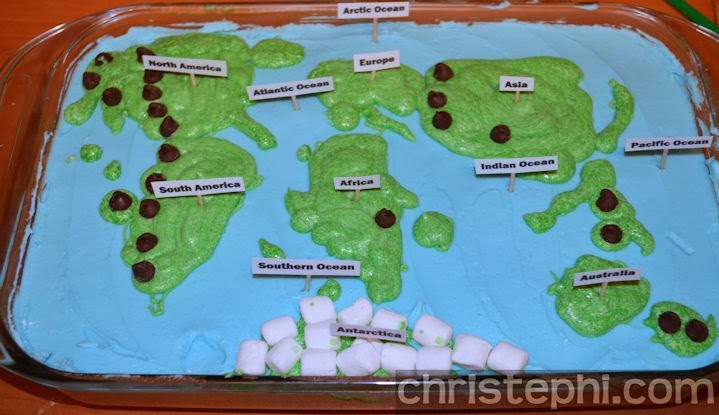 As we embark on a journey to study the ecosystems of the world, we decided to build a self-contained ecosystem to observe right here in our house.  I thought this was especially important since it's the dead of winter and there isn't much to observe outdoors right now. 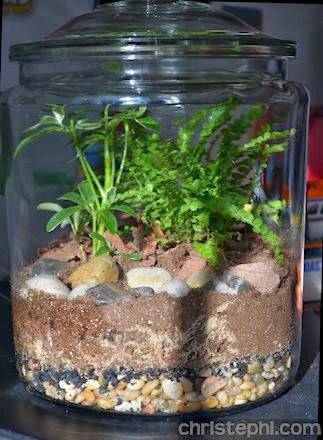 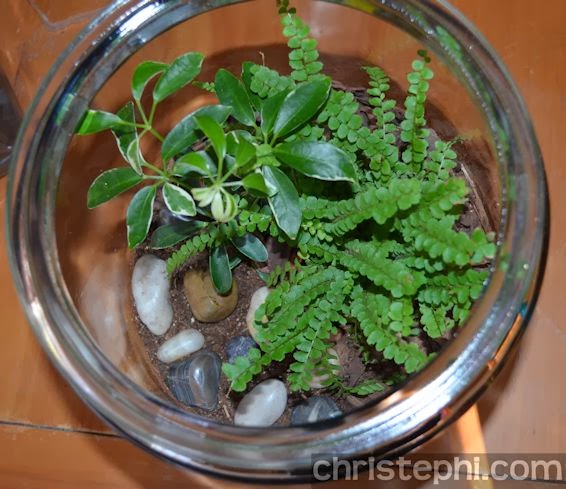 This 2-gallon jar was less than $10 at Walmart and I already had the supplies for the layers on hand from a terrarium I built a couple years ago.  Thankfully, the Walmart we were at had some little plants too (the one we usually go to didn't have any the last time I was there).

Miss M also colored a map showing the biomes of the world. 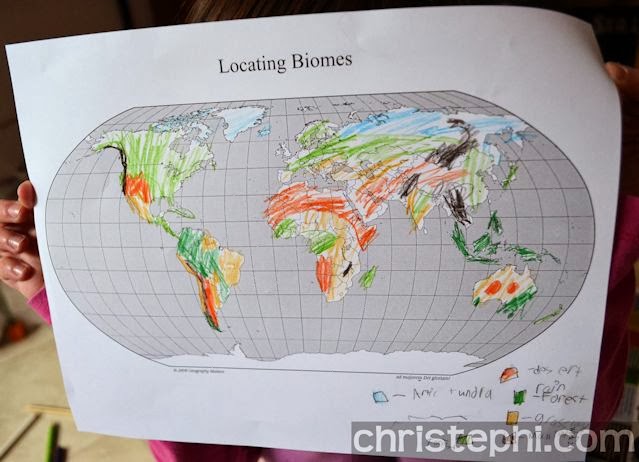 Our last science experiment of the week was a predator-prey camouflage experiment using Skittles that delighted the kids to no end!  We prepared a "habitat" and scattered 30 Skittles of each color around it.  Some of the Skittles' colors matched their environment and some did not.


I required Miss M to pick up only one Skittle at a time with each hand to encourage her to actually look for them rather than just blindly scooping them from the bottom of the container.  And our results were just as expected; she found more of the Skittles that did not blend into their environment than the ones that did. 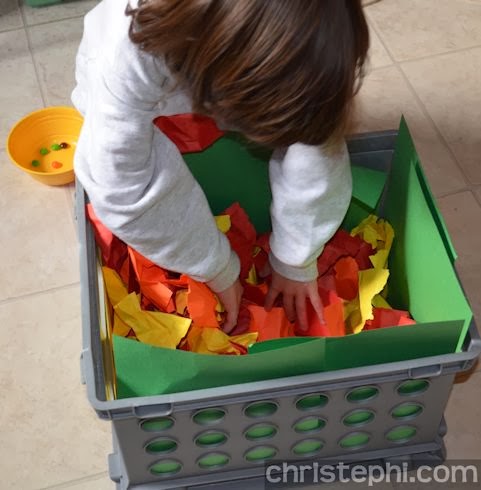 We discussed how this mimics the process of natural selection; the Skittles that were not caught by hunters would be able to live out their life cycle and reproduce more Skittles like themselves.  The ones that stood out from their environment would soon become extinct.  Anything that includes a stopwatch or candy is usually a hit with the kids, and this experiment used both! 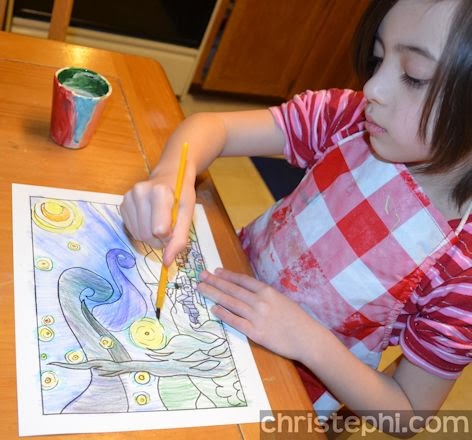 As we've been studying the works of Van Gogh (or Vaingo as Little Guy keeps calling him), the kids have observed his use of bold brush strokes and intense colors.  We decided to "copy" The Starry Night using crayon resist and watercolor pencils. (We used the printable found here.) 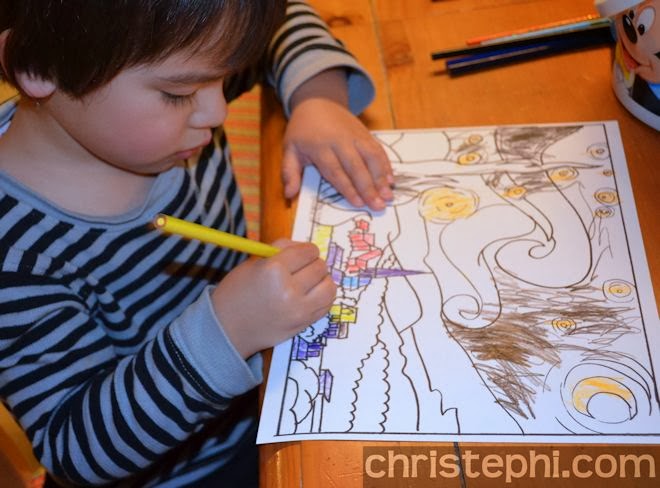 Even Little Guy joined in the fun.  He took an extra day to get his just how he wanted it.  He's never one to overlook the details.  I think before we finish our Van Gogh study, we'll do one of the fun Sunflowers projects I've seen on Pinterest before finishing with a Van Gogh-inspired original on canvas.  The kids'll love that!

I'm still working on a post about Little Guy's progress with My Father's World Kindergarten.  We're moving slowly as planned, so it takes a bit to have anything of interest to say or show!

After this final week of introduction, we're ready to head off on our exploration of North America!  First stop, our very own U.S. of A.  Maybe we'll see ya around?