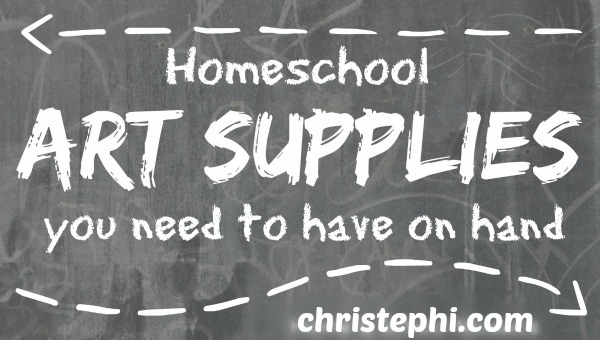 I am not an artist. I can draw passable stick figures — oh, and trees; I can also draw trees — but that’s about it.  My kids are no artistic wonders either.  But we all enjoy sitting down with a few art supplies to let our creativity flow.  I make it a point to keep a few basic supplies on hand.

Get started with the proper foundation.  Cardstock for watercolors, newsprint for a budding reporter, manila paper for treasure maps.  My kids typically sit down knowing exactly what kind of paper they want to produce the art they have in mind.  While plain old printer paper will work for most jobs, having the right paper for the project just makes the whole thing more enjoyable!

The most important thing after something to write on is something to write with!  Does your project call for the bold rich colors of a markers? the smoothness of colored pencils? or the texture of a crayon?  Having a variety on hand can inspire the imagination of budding artists of all ages.

What may look like boring office supplies to you is a world of wonder to a kid! Paper clips, staplers, binder clips and more inspire all kinds of fun and fanciful artwork!

Now that you’ve cut things to pieces with scissors (construction paper confetti anyone??), you’ve got to have a way to put it all back together again.  Collages, paper “quilt” squares, finger puppets, and more can be fashioned with help from a little adhesive.

No artistic experience would be complete without at least dabbling in paint.  There’s something immensely satisfying about swishing your paintbrush in a cup of water and slashing color across a canvas (or piece of cardstock).  Whether you’re progeny is painting the next Picasso or just seeing what you get when you mix orange, green, and yellow, you simply must have some sort of paints on hand!

Some days I’d rather do something less artistic and more crafty, so keep plenty of fun craft supplies on hand!  Twist a whole family of little pipe cleaner figures and set them to work building a home of craft sticks, complete with a kitchen sink out of clay.  Or make a colorful mobile with a few popsicle sticks and some soft yarn.  Let your creativity soar!


What is your favorite art medium?  Did I miss anything you consider essential?
Posted by Christephi at 5:21 PM No comments:

Benjamin Franklin was a great inventor and made a big impact in history. He invented the life-saving lightening rod, started Philadelphia’s volunteer fire department, established a public library, and served as Philadelphia’s postmaster. He also founded several famous newspapers. To enhance our study of his fascinating life, we decided to take a trip to our local newspaper! 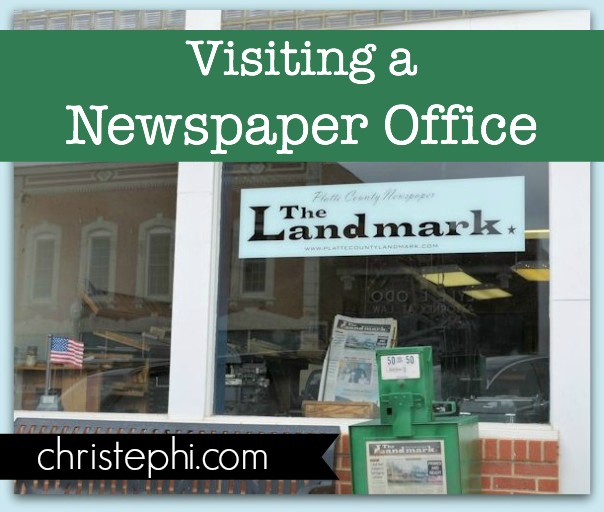 We visited The Landmark, one of the oldest newspapers in the state of Missouri and one of the oldest continuously published newspapers west of the Mississippi. The building The Landmark occupies is itself a piece of local history. It was built in 1869 as a drug store and post office. At that time, a post office was oftentimes a town’s center of news, just like in Benjamin Franklin’s day!

The Landmark sends out its paper for printing off site — easy to do in these days of digital layout and the internet — but their office is home to some amazing old equipment from days gone by. The most fascinating machine for the kids and I was the linotype machine. This kind of printing machine was the industry standard for printed media in the late 19th and early 20th century. It operates by casting a solid line of metal type, thus getting is name: line-o’-type. A linotype machine would have been one step up in development from the movable type press that Ben Franklin used.

Ben Franklin was a man of his time, keeping abreast of the technological and scientific developments of the day. I believe he would be pleased to see The Landmark keeping up with modern times by being the first newspaper in the county to open a news and commentary feed on Twitter “where breaking local news, commentary, occasional clowning, and interaction with the public takes place 24/7.”

Have you been to visit YOUR local newspaper? I’d love to hear about it!

This article was originally published in August 2013 by Home & School Mosaics.
Posted by Christephi at 7:00 AM No comments: