I Must Be Doing Something Right 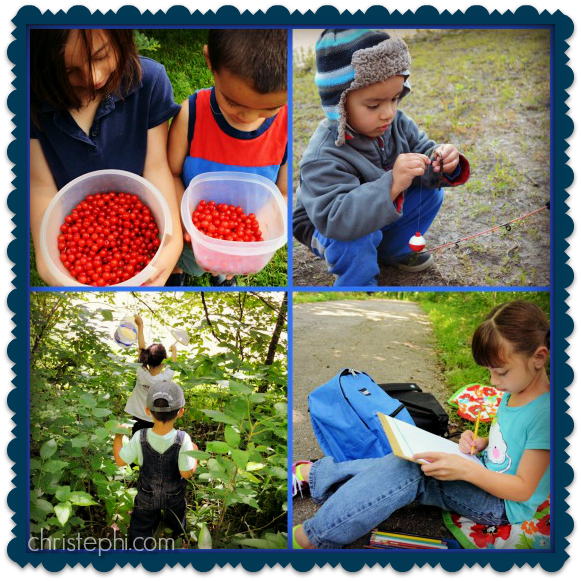 Standing at the kitchen sink with soapsuds up to my elbows, I look out the window and see a little boy under a tree. He has a lapboard and a bucket of crayons. He’s laying on his stomach with his feet up in the air. A curious cat —that thinks it’s a dog —came to investigate him and he scratches it gently, now behind its ears, now under its chin.

I’m sweeping the kitchen floor and stop by the back door window. I wipe sweat from my forehead; it’s summer. I watch a little girl run and leap grabbing hold of a bright yellow trapeze bar. It was new just this spring. I remember that first day; she was terrified to sit on it, afraid she’d fall. Now her young body is stronger and her confidence level is high. She hangs upside-down and hooks her legs over the bar. In an instant, she’s up! And then down again, hanging just by the knees.

The hum of my sewing machine stops. I look at the bed behind me. A little boy is there; he is supposed to be sleeping. Instead, I see his round brown head bent over a book. It’s an old book, a reader printed in 1929; it was my grandma’s. “I know this story, Mama! The one where the pig is building a house.” He can’t read yet, but the book holds his interest a good long while before he surrenders to sleep.

The backdoor slams. Again. I hear the pitter patter of little feet racing toward me. “Mom! Mom! Guess what!” It’s my four-year-old prancing, his eyes shining with excitement. “I counted to 100 without saying ‘one, two, skip-a-few, 99, 100!’” He had been getting tangled up in the teens and hadn’t quite made it to twenty, but once there it is easy to keep on going right up to a hundred.

I’m collapsed in my bed. It’s only one in the afternoon, but I’m not feeling well. A little boy wearing brown knit shorts, an imitation tiger tooth necklace, a feather headband, and warpaint comes running in to me. “I’m an Indian boy,” he says as he leans his whole body against me, “and I live here with you in Indiana.” His shining eyes sparkle as he shares this intimacy with me. He kisses my cheek and runs off again.

“Every good and perfect gift is from above, coming down from the Father of the heavenly lights, who does not change like shifting shadows” (James 1:17).


Not every day is perfect. There are still times I have a child dissolve into a sobbing pile of snot because I dared to leave him with daddy while I drove five minutes across town to cast my ballot in the local election. True story. But within the midst of the mundane (and sometimes the frustrating) there are glimpses of perfection. They are gifts from Above reminding me that this life I lead, this work I am doing, is worth something. The work I am doing, the boring, hard, insufferable, joyous work, is right. I am doing something right. It’s right for me and right for my family. And I am blessed because of it!

This article was originally published in September 2014 by Home & School Mosaics.

Creation to the Greeks: Halfway Through the Year

We are now a little over halfway through Creation to the Greeks and MFW First Grade. As you may have noticed, I dropped off blogging every week as I expected I would. It's easier to blog when the days are short and cold, but much harder to find time for it once spring arrives and we're out gardening and such in our spare time.  I wouldn't have it any other way!  If you wish to keep up with our weekly doings, you'll have to follow my Facebook page which is updated almost every day that we do school!

So, now that we're on the downhill side of the year, I thought I would write a little about what has worked well for us this year and what hasn't.


Back in January I copied the grid pages from my CTG and First Grade teacher's manuals and assembled them into a lesson planner for the year. (Remember: MFW allows for photocopying of the grid pages for planning and record keeping as long as you agree to never loan, give, or sell the teacher's manuals you've copied from.)  Since I am running these two programs concurrently, this has been a life-saver!  Sure, I still have to pull out the First Grade TM for the phonics lessons and the CTG TM for the notes of the week, but I don't have to juggle them both all day long. I can stash them safely back on the shelf out of my way while keeping my planner handy and keep us moving efficiently on through our day. 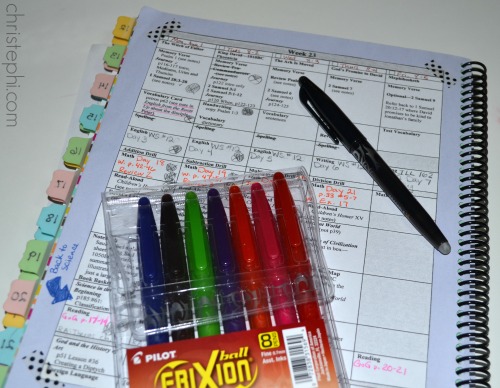 My other stroke of genius (or at least it felt that way when the idea came to me in the wee hours one night) was to make a second set of copies of the CTG grid for Miss M's planner.  I went ahead and had the extra copies spiral-bound into the back of my planner so that once a week I can pull out the next week's page and have her prep her planner.  At first I was doing this for her. I would cut apart each day and tape it one day per page into her spiral notebook. Then I would write extra details or special instructions for each lesson.  Somewhere along the way we shifted this task onto her shoulders. Now she puts the lessons into her planner herself and I read her the notes to record. I am so thankful to be modeling this kind of organization and self-regulation for her as she approaches the junction between late elementary and middle school.


I really wanted to make verse memorization something pleasant and maybe even a little bit exciting for the kids. To that end, I created a little "treasure box" of prizes they can pick from at the end of each week if they are able to recite their memory verse(s) correctly. I don't have something new in there every week, but I try to snag little inexpensive surprises to toss in there when I can.  Recently there was silly putty and a Wooly Willy in there. 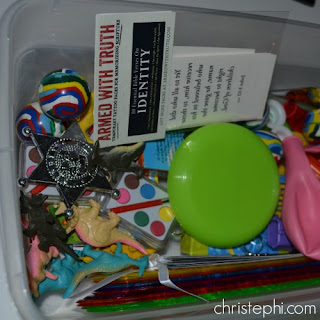 
Art has both worked well and not worked well. Here's what I mean. We started out the year doing both the art from First Grade and from Creation to the Greeks. The only problem is, my first grader really dug his heels in about participating. He's a bit of a perfectionist and just doesn't have the fine motor control to accomplish what he envisions.  So while the program itself was enjoyable, he wasn't having it.  For that reason, I set aside most of First Grade art and have focused on God and the History of Art from Creation to the Greeks. Mister E participates as often as I can get him to, but Miss M and I are enjoying it immensely!  Just take a look at some of the things we've done! 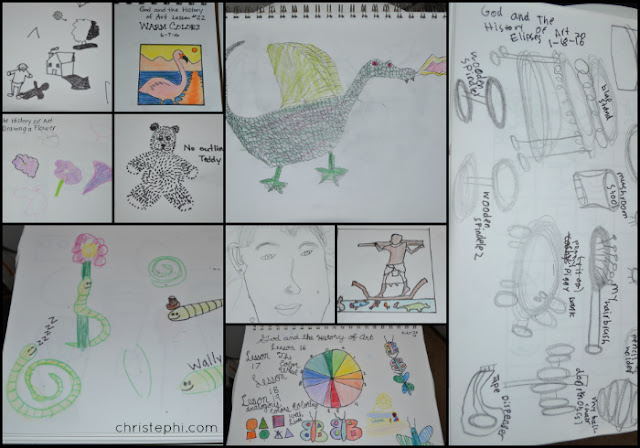 
We are using MFW's recommendations for 5th grade language arts: the middle third of Intermediate Language Lessons and Writing Strands. (We aren't doing formal spelling, but that's a post for another day).  The way the teacher's manual schedules language arts is ILL on Mondays, Tuesdays, and Wednesdays and then WS on Thursdays and Fridays.  I found through the course of last year and this year that this schedule doesn't work well for us.  Many times the Writing Strands units take 4-5 days to complete.  Having a huge gap between days (the weekend plus three days of ILL) made for a really broken flow. We would waste a lot of time trying to remember what it was we had been doing, where we were in the process, what she had been thinking of writing, etc.  In order to make the writing process flow more smoothly, I have adjusted the timing of the lessons. Once we begin a unit in Writing Strands, we set aside the Language Lessons until the WS unit is complete. At that point we go back and pick up the ILL lessons we missed and do those back-to-back days until we are caught up. Then we flip back to WS.  This sort of blocking has made a lot more sense to us than breaking up the WS units across several weeks. 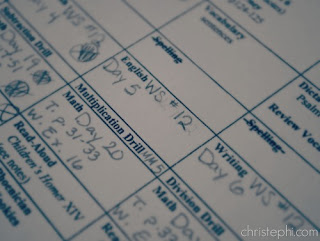 Since this year is all about Biblical and ancient world history, notebooking has taken center stage. MFW sells a pack of student sheets to go with Creation to the Greeks and we have been using those, but we have added quite a number of sheets in addition to them.  All of our extras have come from NotebookingPages.com. <--- this is an affiliate link. If you sign up through this link I will get a little kickback. And if you sign up....THANKS!  We have added pages for major characters, major events like this Jericho page, people groups, geographical locations, etc. It's a great way for the kids to capture what they're learning and is going to make a great keepsake at the end of the year! 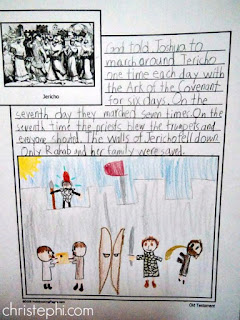 
Our biggest failure has been -- no surprise -- foreign language. That seems to be the one area I just cannot seem to get a handle on!  We loved Song School Greek when we started out our year, but I just can't seem to fit it in. By the time we're done with everything else, we're done in and ready to break for outside play, housework, and supper plans.  Darn!  But I figure, if nothing else they've learned the Greek alphabet and that's more than I had at their age. 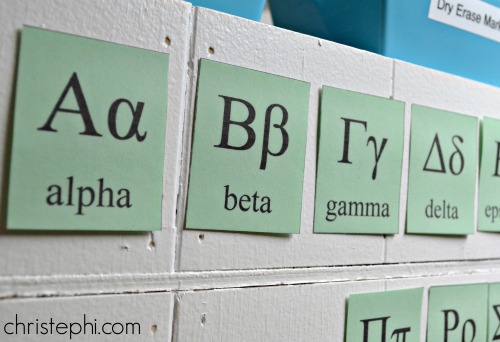 Posted by Christephi at 9:57 PM No comments: