After going through two prototypes (here and here), Miss M's Cinderella dress is finished!  Her birthday isn't until mid November, but I really wanted to have it done as soon as possible since we don't know when this baby will decide to arrive.  If he's on the same schedule Miss M was on, it could be as early as next week!  (And as long as he's healthy like she was, I wouldn't mind a bit!)

I wasn't originally going to make the dress lace up in back, but I'm too cheap to use a zipper.  A zipper = $4 or so and you can buy a whole spool of ribbon for $0.50!  Besides, I'm going to use some scraps of the blue satin to make a cord for it...and this way it'll fit her longer because even when she's a little too big around for the dress, I can just tie the laces a little looser et voila! 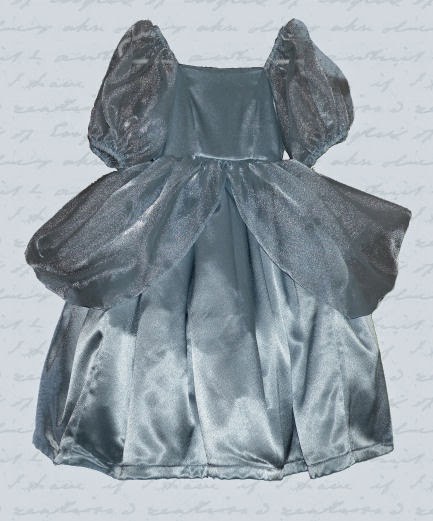 The other change I made to the pattern, besides getting the fit of the bodice right, was to add an underskirt or crinoline of bleached muslin and tulle to give it extreme poofiness.  I think I went a little overboard because it is ridiculously poofy.  She is absolutely adorable in it!  Sometime between now and November 19th, I guess I need to buy some black velvet ribbon for a choker and find a suitable pair of "glass slippers."  I'm thinking some of the silver sparkly shoes I saw at Target will work just fine.

Does it ever bother anyone else that when you watch Disney's Cinderella the dress the Fairy Godmother makes for Cinderella is so obviously silver and is only tinted blueish because it's nighttime?  But somewhere along the way Disney decided that Cinderella's dress is blue.  It bugs me.  A lot.  Hubby just laughs at me though and tells me to just go with it.  Besides, how can I convince Miss M that Cinderella's dress isn't really blue when every illustration she sees has Cinderella in a blue dress!?  So daughter and husband are happy and I'm the odd man out.  I don't really mind though...at least it's not pink!  And she is seriously adorable!
Posted by Christephi at 1:16 PM

Email ThisBlogThis!Share to TwitterShare to FacebookShare to Pinterest
Labels: dress up costumes, Sewing