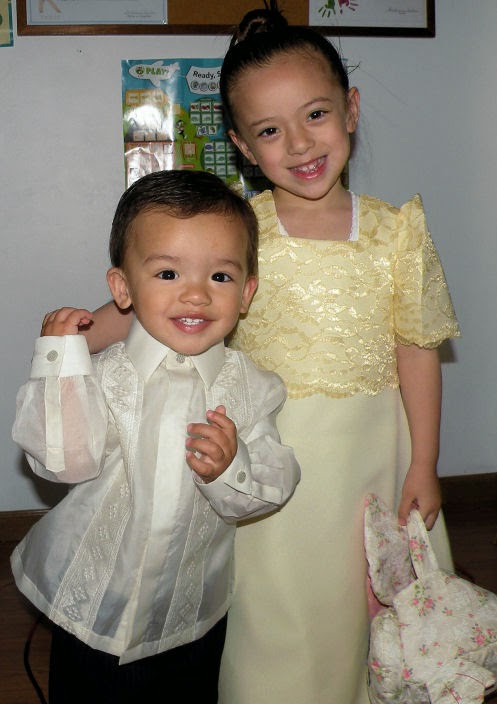 For Easter this year I decided to make Miss M a traditional Filipino-style dress.  I Google-searched a lot of images before I had fixed in my mind what I wanted the dress to look like. At first I thought I'd make the older baro't saya or blouse and skirt with the accompanying wrap around skirt and scarf (like the one the little girl is wearing in this picture), but in the end I went with a terno which is what the baro't saya has morphed into in modern times.

I was quite intimidated by the "butterfly" sleeves à la Imelda Marcos, but it really wasn't so bad once I got started.  In fact, the whole dress went together pretty quickly!  Fast enough that I was done the Tuesday before Easter and I had time to make myself a blouse too!  I'll post about that later.  It's just a simple A-line design generously flared at the lower hem, with a bodice overlay, and of course those sleeves.  There are two ruffles of netting attached to the lining to give it poof just like you would find in store-bought dresses.

In keeping with the "theme," I purchased Little Guy a barong tagalog.  It's a rather big on him, so hopefully he can wear it again at Christmas and next Easter...and if we have any weddings come up, he'll probably wear it then too!

Aren't they just as cute as can be?  The whole ensemble went over quite well with my in-laws, as you can imagine.  I threw away most of the candy they collected.  I really hate when they get a lot of candy because they think they're entitled to eat it and the sugar rush turns them into little monsters!  So in the interest of my sanity, I gave them each a few pieces and dumped the rest.
Posted by Christephi at 4:41 AM