For our second week of second grade, we added in math, foreign language, and some read-alouds to our lessons.  This gradual start to the school year has been so nice!  It allows to get our feet wet with our new schedule and become familiar with our books without jumping straight into deep water!


After completing Calvert First Grade Math, Miss M was ready to jump into Singapore Math 1B.  The first few lessons are a simple review of some things she already knows, but I've looked ahead and she is going to be introduced to new material pretty soon.

She was a little disappointed by the lessons so far: "Mo-om, I already know how to do this!" But I'm confident this is the right level for her. So far she wanted to do more math each day, but I had to stop her so we could accomplish the rest of our lessons in a timely manner.  (Sorry, child, but Mama just can't sit and do school with you all day long! If I do, there will be no supper and no clean clothes to wear).

The teacher's answer book for Singapore Math is rather diminutive volume and it kept getting lost among the other books on our school shelf.  So I used my three-hole punch to punch holes in it (even though there were only room for two holes since it's so small), and I keep it in my Teacher's Planning Notebook.  I did the same thing with the Rosetta Stone teacher book.

We had a visitor to our school this week. Janet the Fox came to take a test.  Miss M said that if her fox went to a place where the people speak Spanish, they should call her Señorita Jan-ita. 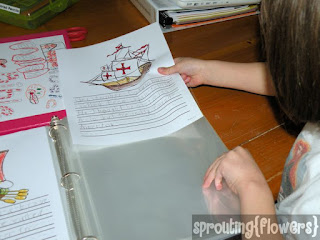 In history we learned about Christopher Columbus sailing to the New World.  Miss M thought it was very interesting that he was a mapmaker but didn't know about the continents of North and South America.  Actually, I'm not quite sure she believes that part of the story!

We made aluminum foil boats with barbecue skewer masts and printer paper sails to represent the Niña, the Pinta, and the Santa María. The masts were held in place by a ball of modeling clay. 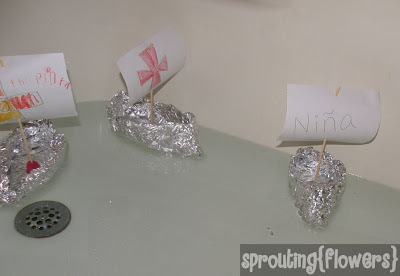 These three ships were sailed across the Atlantic Ocean, er...the bathtub...driven by strong trade winds, er...the breath of babes.


After blowing on ship sails, we had some more fun with air including an experiment that demonstrated that an empty plastic bottle isn't empty at all and is quite full of air!  We also held some paper races!

Our snow storm last week was repeated early this week.  So much of our time was spent looking out at the beautiful snow, counting feathered friends, and shoveling mountains of snow! 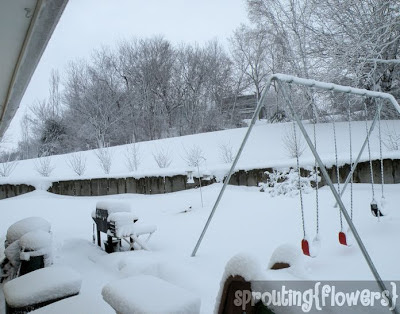 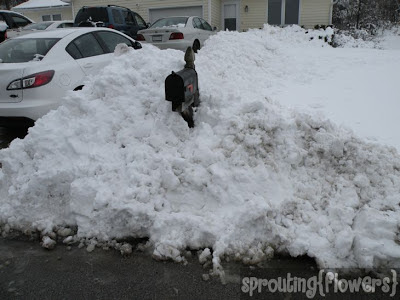 On Friday we took a nature walk.  We didn't go far because the snow is still deep and it's hard for little people with little legs to walk in it for long.  But we did see a couple deer and find their tracks in the snow.  Miss M was ecstatic to find some berries under a tree!  Until I told her they weren't berries at all, but deer droppings.  She decided then and there that's what she would draw for her nature journal when we got home.

Thankfully, she forgot about the deer poop and focused on identifying a tree of a twig she brought home. 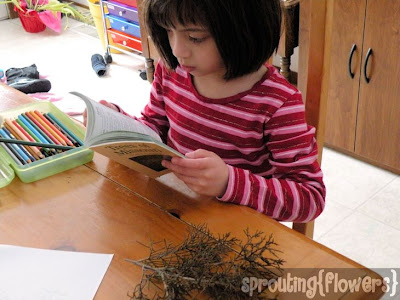 She managed to identify it as an Eastern Redcedar.  It is used by animals for food (small purple berries), nesting, and cover.  People use its wood for chests, closets, posts, poles, and pencils, among other things.

We had a wonderful second week and are looking forward to next week (and some warmer weather)!


Come see what adventures we had in Week 1!

Posted by Christephi at 3:54 PM