It's important to teach our kids about fire safety in a way that empowers them and doesn't immobilize them.  To that end, I decided we'd have a mini fire-safety unit during our two week break.

At the beginning of the week I warned the kids that we were going to have a fire drill sometime that week and not to be too worried when I started shouting that the house was on fire and we needed to get out. 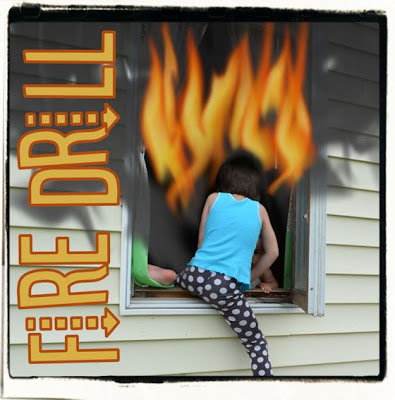 I planned to catch them at a time when they were both in their bedroom playing together.  Then I'd go in, shut the door, and tell them there was a fire in the kitchen and we needed to get out, but we couldn't go through the hallway.  We talked about how to touch the door to see if it was safe and how to block the bottom with rags to keep out the smoke.  Then I showed them how to egress from their bedroom window.  The kids loved that!


When I was a little girl, we lived in a trailer house in a trailer park in Arizona.  One night, the trailer next to ours caught on fire!  Thankfully, my mom listened to her nose when she still smelled something burning even after she had double-checked the iron and the oven and had gone to bed.  She dialed 911 and got the baby while my stepdad grabbed my little brother and I out of our bunk beds.  We all rushed outside and took refuge with the across-the-street neighbors while we waited for the fire department to respond.  All's well that ends well, as they say!  The trailer house was destroyed, but no one got hurt and, thanks to some quick-thinking men, the vehicles and other trailers on the block were undamaged.

From that time on, however, fire drills always made me a bit more anxious than normal.  While my classmates celebrated the chance to get out of class, I was always trying to stave off a sense of panic that threatened whenever the fire alarms began to blare.  I didn't often suffer from nightmares, but when I did have a bad dream, it almost always was about a fire.

Have you had a fire drill with your kids?
Have you practiced going out the window?
Pick a nice day this summer to talk with your kids about fire safety and have a drill!
Posted by Christephi at 10:59 AM