We had a short week of school this week.  Hubby was home from work Thursday and Friday, so I did a bit of rearranging of our schedule: dropped 2 days of math & reorganized our science and history to fit in three days.  I figured out that we're going to be done with math before we're done with the rest of our lessons anyway.

In Bible we reviewed the story of the Passover from last week and talked about what it meant for the Israelites to put the blood of the lamb on the frames of their doors.  I gave Miss M some strips of red construction paper to put around the frame of her bedroom door.  This activity wasn't part of our curriculum, but I think it helped her understand what happened at the first Passover a little better. 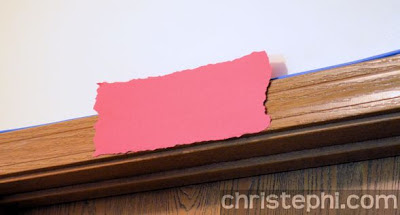 In history we learned about Johnny Appleseed and I gave the kids each a cup of tomato juice, the state drink of Ohio.  They were both pretty disgusted. Ha! 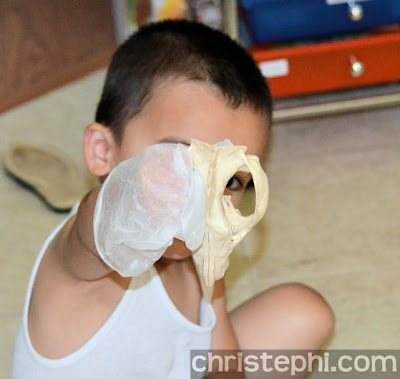 Little Guy wanted to do a little scientific investigation of his own while Miss M was doing her work, so he got out a box of possum bones (and insisted on a pair of gloves like on Bones).  He really enjoys exploring natural artifacts and, as in all things, he notices all the details and sees the similarities and differences between things. 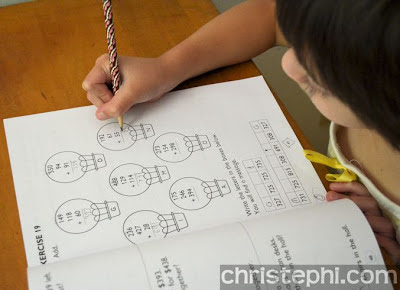 Now for the honest bit: this was a really rough week.  Miss M did not want to do her writing or math and spent ages getting her lessons done.  Tears were shed.  Frustration levels ran high.  Tempers were on the verge of being lost.  Lots of prayers were said!  It wasn't pretty.  But in the end, she completed her lessons and hopefully learned that next time she might as well get her work done more quickly instead of stretching it out hour upon hour.  Here's hoping next week goes more smoothly!