It's a new school year at Sycamore Hill Academy!  Miss M is now in 3rd grade and Little Guy is beginning the first of two years of kindergarten (K4 this year and a slightly more rigorous K5 next year). 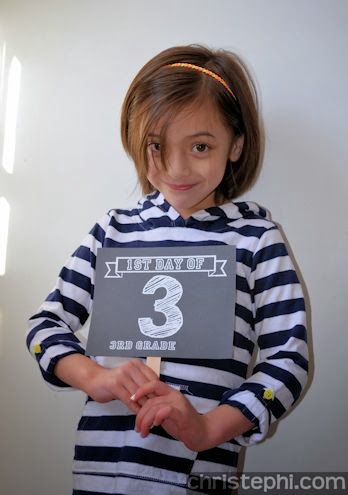 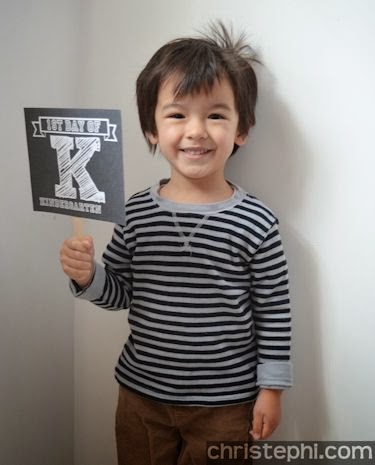 I found these cute printables via Pinterest and we had a little photo shoot on our first day! 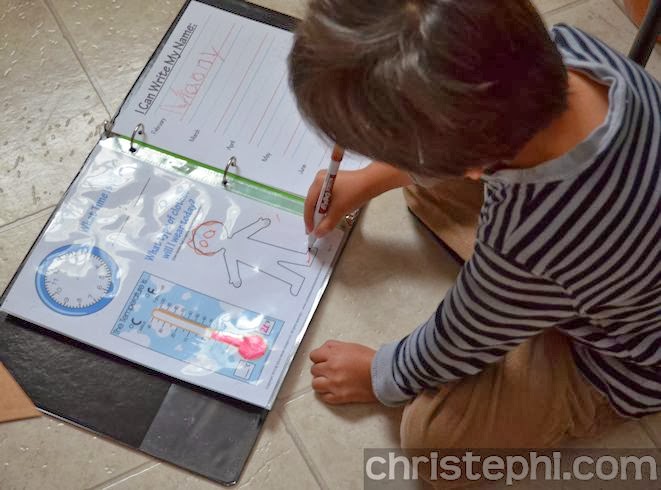 We are starting each morning with My Daily Learning Notebooks from Confessions of a Homeschooler.  The PreK one for Little Guy and the cursive variant for Miss M.  This has been hugely popular!  Both kids have gotten started on them before I'm even ready to begin school most days! And they work together on the so sweetly, Miss M lending a hand to Little Guy and he hanging on her every word. I love it! 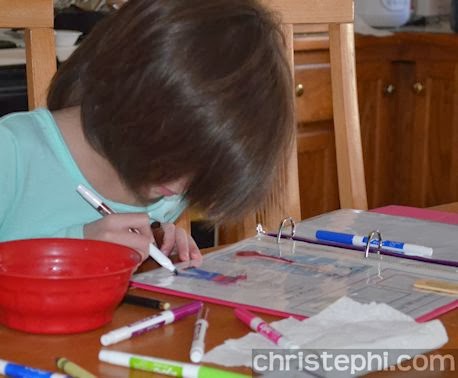 To start off our year, we systematically went through some important concepts: where the world came from, how it got to be the way it is now (the Fall), how different languages began, and the gospel is for all the peoples of the world.  We memorized John 3:16 and were introduced to the basics of Christianity and Judaism. 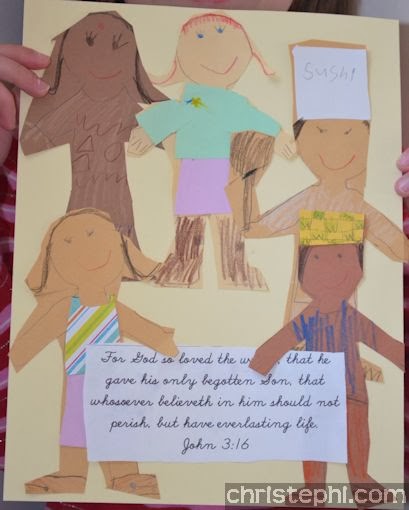 
Singapore Math 2B jumped right into subtraction of three digit numbers employing mental math techniques. Miss M got into the swing of things pretty quickly.  We're also drilling addition on Mondays, subtraction on Tuesdays, multiplication on Wednesdays, and  division on Thursdays.  Memorization of the basic math facts is one of our main goals for math this year. 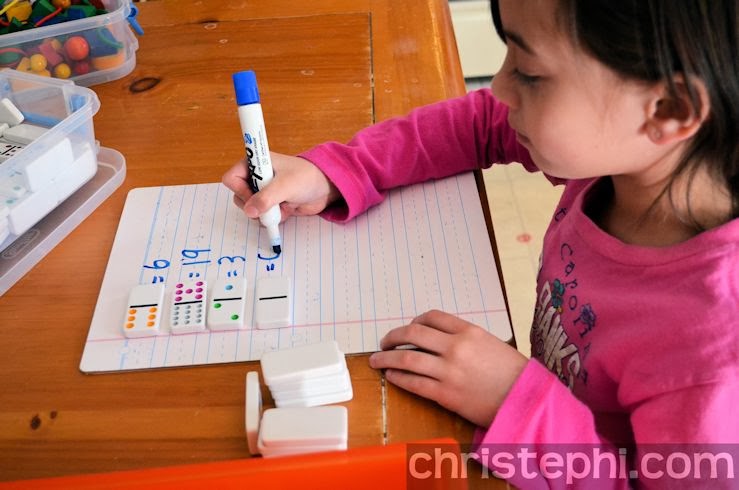 Drilling facts doesn't have to be boring! Miss M used dominoes to practice addition facts one day and played a dice game for subtraction practice another day.

Our lessons from PLL have included topics such as the plural form of nouns, the possessive, prepositions, and some interesting information about silk production.

The word lists at the start of Level F in Spelling Power have had quite a few review words. So far Miss M has aced them all, but I've pulled a few additional words she misspelled in other work for her to practice. I foresee spelling being discontinued as a subject once she finishes Spelling Power.  I've also noticed she tends to misspell words more frequently when printing and less frequently when using cursive. Telling, no? 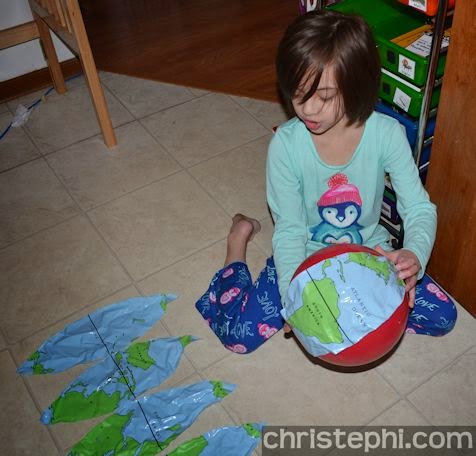 Geography and Science are going to be our two most time consuming subjects this year.  Because of that, I plan to start block-scheduling them on mutually exclusive days.  For a year focused on geography, there's only one logical place to begin…with map skills!

We started out discussing why it's difficult to accurately portray a round world on a flat map.

We discussed scale and made a scale map of the kids' bedroom. They both loved measuring all the furniture and converting the measurements to squares on our graph paper!  Miss M also drew a poster sized map of our town and created a map key with symbols for the significant locations on the map. It was quite time consuming and she really put her heart into it. We discussed latitude and longitude and sent Pinkie Pie on a journey around the globe, investigating all seven continents and five oceans (did you know there are now five oceans?) 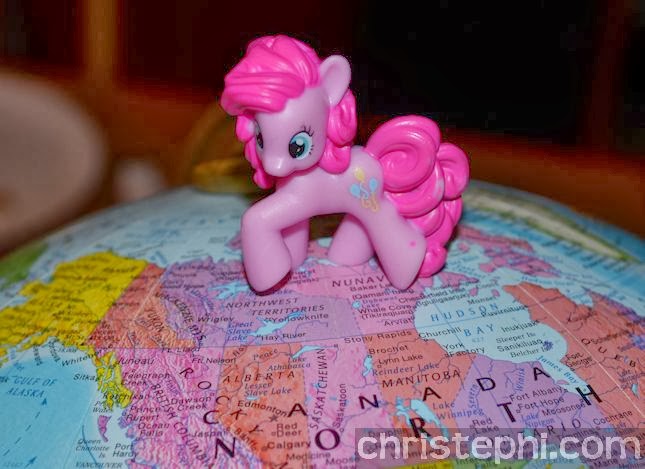 She had a blast and finally perched herself in pretty pink Canada!


Our science program this year is two-fold. We will be learning all about ecosystems and the biomes of the world as well as about the different animals that dwell in those biomes.  Our work started off a wee bit dry as we learned what an ecosystem is, what a biome is, and what a habitat is, plus took a look at the account of Creation in Genesis.  Luckily, both portions of our curriculum incorporate great hands-on ideas to keep the kids engaged and really bring the science alive!


Our music this week consisted of an old hymn and a song from Wee Sing Around the World.

For art, we began our first Charlotte Mason style artist study of Van Gogh.  More on this in Part 2!


Our theme for the next several weeks is pamilya, the family.  Miss M reviewed flash cards, sang songs, answered questions about a family tree, and drew and labeled a filipino family.  Her favorite part of her drawing is "the kooky lolo!" 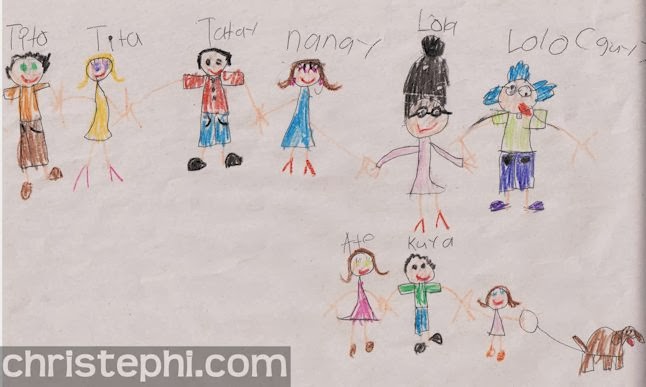 I'll write more about what Little Guy has been doing later, but have no fear, he's been tagging along in all the fun! 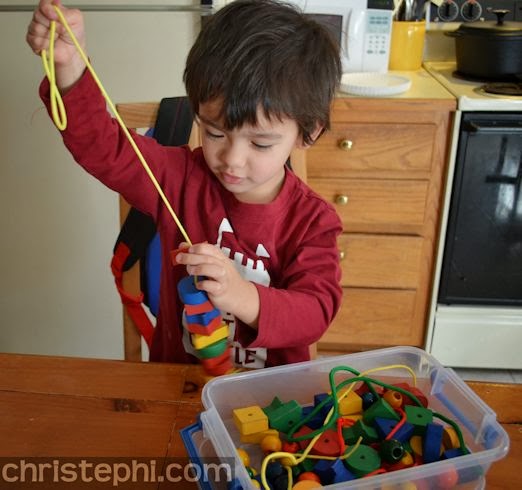 Books We Read (and enjoyed!)

We started reading The Secret Garden by Frances Hodgson Burnett before starting back to school and the kids are loving it, so we've kept right on with our reading of that at lunchtime.

Other books we loved:

I was very tempted to go ahead and purchase a copy of Janice VanCleave's Geography for Every Kid for our home library! It's not one that my kids cared much about (no colorful pictures), but it's just the sort of book I would have enjoyed when I was a kid! The text is written in such a friendly, matter-of-fact tone that manages to make geography and maps very exciting and interesting.  I think it would be especially appropriate if you are doing ECC with upper elementary students versus my early elementary kiddos. 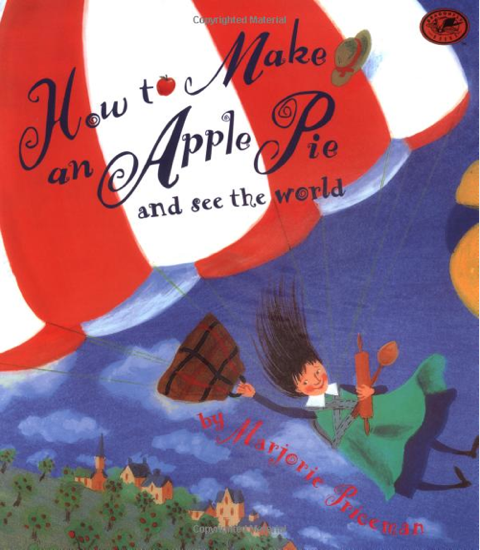 How to Make an Apple Pie and See the World is an over-the-top adventurous book just the way my kids like 'em!  If we weren't already making a world cake and birthday cake this week, I'd have made apple pie from the recipe in the back.  We might just have to revisit this one for the plain fun of it in the future! 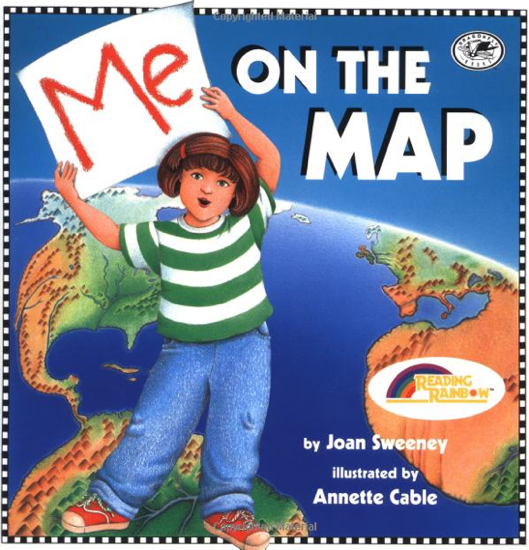 Miss M got very excited when we sat down to read Me on the Map together because she remembered it being included in her Reading text from Calvert 1st grade.  (She has a better memory than I do!)  I loved the colorful, detailed artwork and the concept of each person having a place that is theirs represented on the map.

Peter Spier's People kept the kids entertained for hours of book basket time!  Honestly, I don't even know all the things they were looking at and learning about people in the world (all the different types of noses was a particular hit!) since I was taking advantage of the time to do housework, but they were just thrilled with it and were terribly disappointed when it came time to take it back to the library.  I can see this one being another that eventually gets added to our home library. 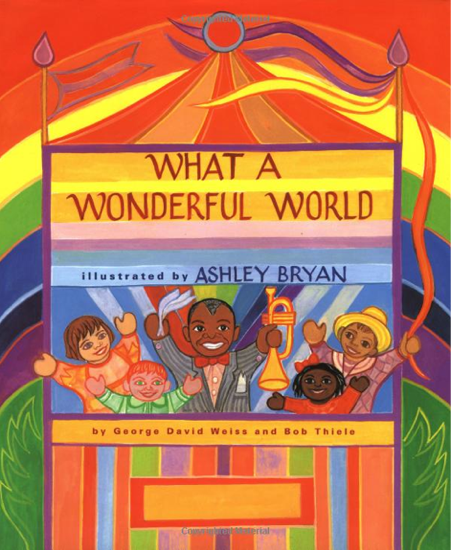 When I picked up What a Wonderful World from the library I didn't realize it was actually the lyrics from the famous song sung by Louis Armstrong.  Of course, when I sat down with the kids to read it and made that discovery, I quickly hopped on iTunes and downloaded Mr. Armstrong's song for the kids to listen to.  It became an instant favorite and even Little Guy has been going around singing it to himself all week!  The book is absolutely gorgeous in its own right, but coupled with the song…not something you should miss!
The first two weeks will be the only two weeks of Exploring Countries and Cultures that we are taking as written in the teacher's manual.  The rest of the year (which for us will be two years) will be spaced out -- every two-week unit as three and every three-week unit as four -- with several other weeks/countries added in.  I'm glad, because these two weeks have been a bit intense with each day taking far longer than our school days last year.  It's been a blessing too though because this time of year the kids aren't able to be outside playing and they need something to keep them occupied.  Still I know if we tried to keep up this pace all year long we'd get burned out pretty quickly.
Posted by Christephi at 1:37 PM