{Book} Review: Beneath the Forsaken City by C.E. Laureano

So when I got the chance to read a Christian fantasy novel for review, I decided it was an opportunity I didn't want to pass up.

I didn't realize it when I first started, but Beneath the Forsaken City is actually Book Two in the Song of Seare series.  Having not read the first book, Oath of the Brotherhood, didn't slow me down a bit.  I was able to jump straight into the story and follow along without any trouble.  Although clearly I might have had a better understanding of the characters had I spent time with them in the first book. 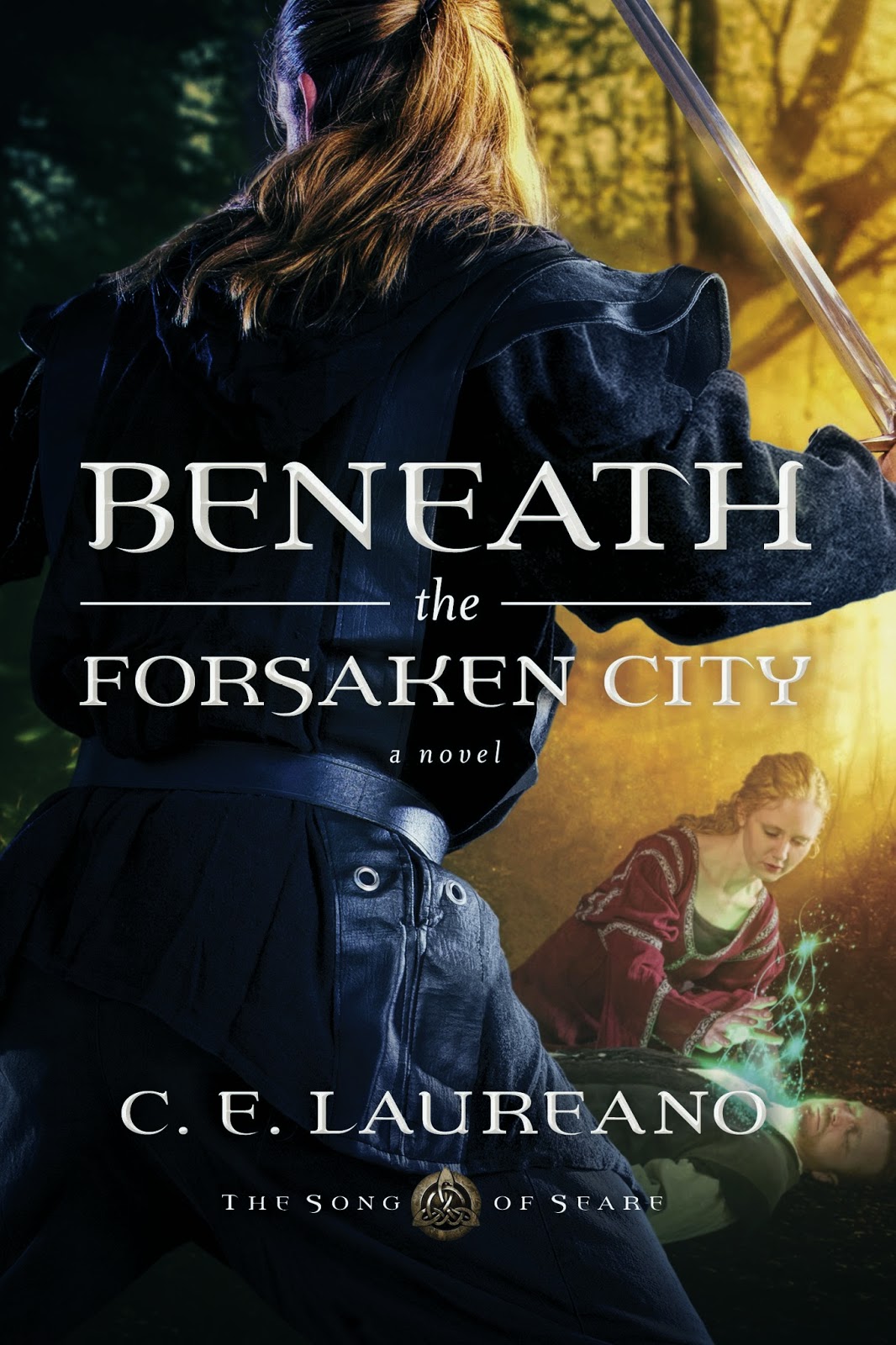 A Storm on the Horizon.
A Brotherhood Scattered.

Conor and Aine have barely escaped Seare with their lives. Conor knows he must return to find the harp that could end the Red Druid’s reign of terror, but in the midst of their escape, he and Aine are torn apart once more. Surrounded by despair and thrown into as much danger as they left behind, Conor and Aine must cling to the whispers of Comdiu’s plans for them and the homeland that depends on their survival. But at what cost? Will they learn to depend on Comdiu completely? Or will they give up hope?


There is nothing I like more than a steaming hot bath after a long trying day.  Having an engaging book to read makes it even better!  And that is how I cracked the cover of Beneath the Forsaken City.  I blazed through the first three chapters before turning to a prune.  After all that relaxing, my bed was calling.  But it only took me two more days to finish the book.  And that's with homeschooling my kids and executing all my other household obligations!

The story begins with Conor and Aine escaping on a large sailing ship.  There had been a violent battle and though I admit I got a little lost at first with all the Celtic names of clans and individuals -- I gather I would have been less confused if I had read the first book -- it wasn't long before I was sucked into their world, their fears and hopes becoming my fears and hopes.

There is nothing I like more than a steaming hot bath after a long trying day.  Having an engaging book to read makes it even better!  And that is how I cracked Beneath the Forsaken City.  I blazed through the first three chapters before turning to a prune.  After all that relaxing, my bed was calling.  But it only took me two more days to finish the book.  And that's with homeschooling my kids and executing all my other household obligations!

Other than C.S. Lewis, I had never read a Christian fantasy book before.  I was a little skeptical going in, worried I wouldn't like what I encountered.  But the opposite could not be more true.  Not only did I absolutely love the story, but I loved the way the author created a world in which the characters serve Comdiu who has a Son named Balus.  I loved the magic component and the way the good characters who had magic were trying to use it correctly in a way that served Comdiu.  There were, of course, also bad characters who would rather use magic to serve their own ends.  This was all very new to me!

Beyond enjoying the content, I was very pleased that the author used words.  And by that I mean that I did not feel that my intelligence was insulted by dumbed down language.  I confess I went in with a bit of hesitation, afraid I would find the writing to be poor and unimaginative.  But my very first impression, before I even had a sense of who the characters actually were, was that the book was written very eloquently.  And I appreciated that very much!

I didn't take the book as a moralistic allegory the way some Christian novels try to be.  Instead, I felt a kinship with the characters who faced realistic struggles in the way they were attempting to live out their faith and battle against a world dominated by an Adversary.  I could identify with many of their faults and misgivings as well as their triumphs.  It was a more natural parallel to my own experiences than I had expected.

My only complaints were the Gaelic names.  I didn't discover the pronunciation guide in the back until I had finished the book (oops!) so I had no idea that sidhe was pronounced "shee" for example.  If you have more experience with Irish or Scottish Gaelic, you may not find this a problem and if you don't, I recommend you consult the glossary in the back sooner than I did!

All in all, I highly recommend this book if you are looking for an engaging read -- I haven't mentioned all the wonderful twists and turns in the plot; you'll have to discover those for yourself -- and I will keep an eye out for a third book in this series!

Posted by Christephi at 3:11 PM