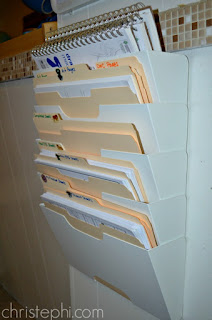 Two years. That's how long we spent in Exploring Countries and Cultures. We moved between those years and while we didn't gain much in the way of square footage, we did gain a space to homeschool in that isn't also where we dine.  We moved mid December 2014 and by January I had everything set up and ready to go. But that was then and over the course of the past year I've tweaked our space several times as we've figured out what works and what doesn't.  Now that it's time to start a new school year, I've put away the flag banners and redecorated with Egyptian and Greek artifacts.

The way we are managing school papers is probably our biggest change this year.  I have given up three ring binders (I'm always behind getting stuff filed in them anyway) in favor of a simple series of manila folders.  Get student sheets out of one, put them back into a different one. At the end of the year I'll gather the stack and take it to be spiral bound. No hole punching. No sheet protectors. No bulky binders left laying around.  This is either going to be sheer brilliance, or a complete disaster. Time will tell!

Without further ado, photos of our new setup and decor! 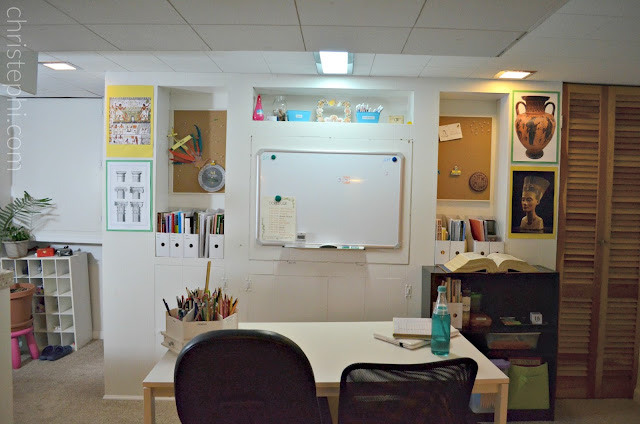 If you're thinking the table looks crooked, you are correct. An uneven floor means a sloping table. I usually prop up one end with bits of cardboard until it is level. Keeps verigo at bay! 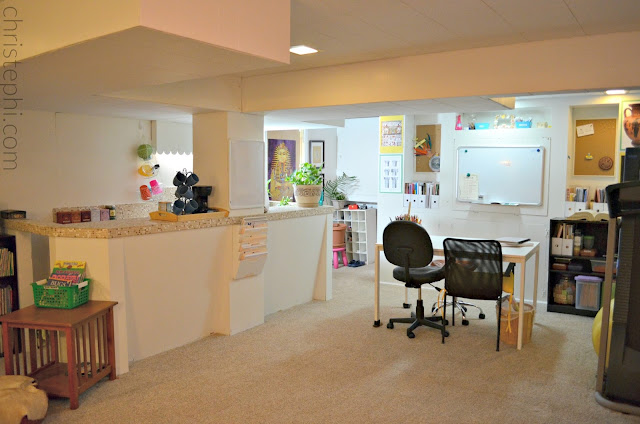 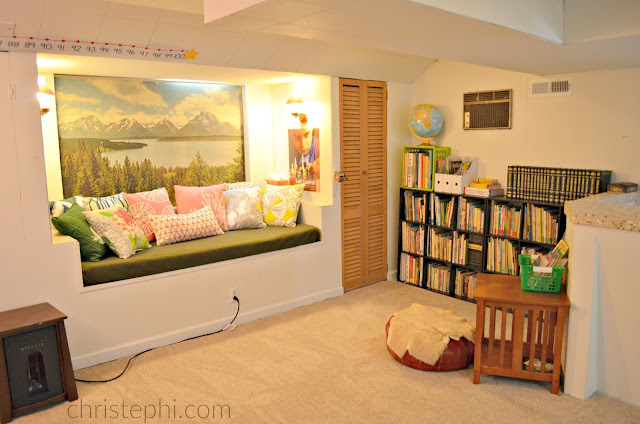 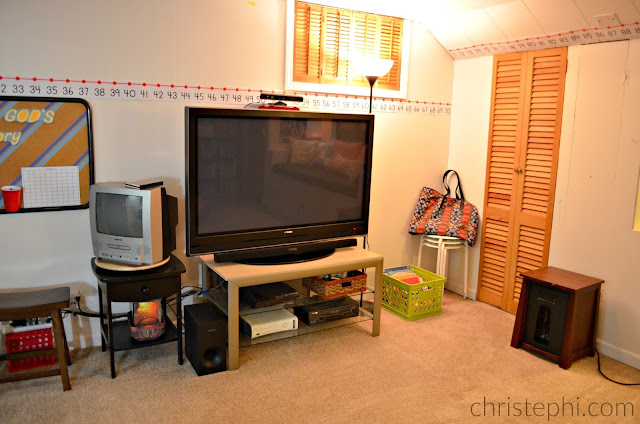 Seems kind of silly to have two TVs, but the little one is used by Hubby when he runs on the treadmill. It also plays our school CDs without fuss. The big TV is for Hubby's video games and streams Netflix and Amazon Prime. 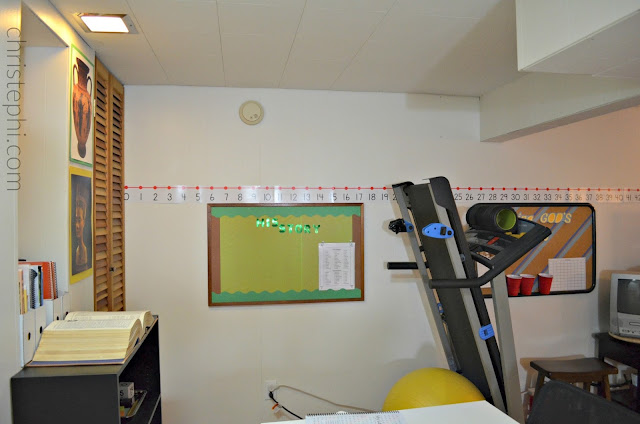 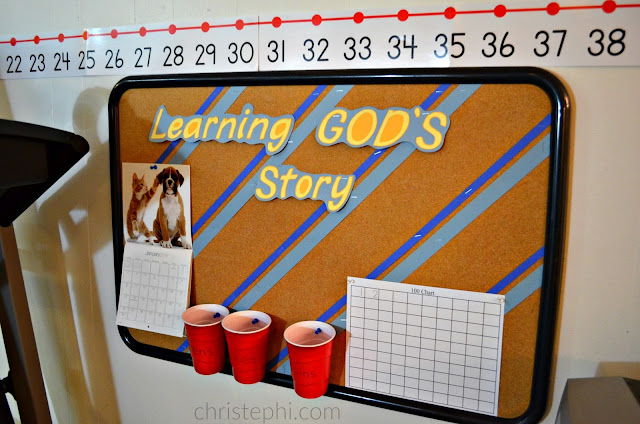 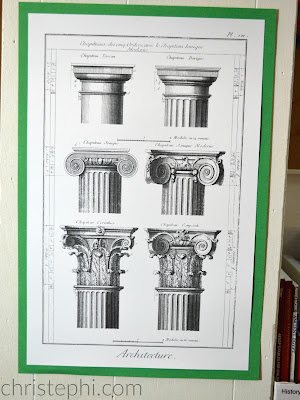 Did you know that there are TONS of amazing images available free for anyone to download because they are in the public domain?  I found some gorgeous images and had them printed up on ledger sized card stock at OfficeMax. Total cost for all four posters? A whopping $4.69.  That's a steal! 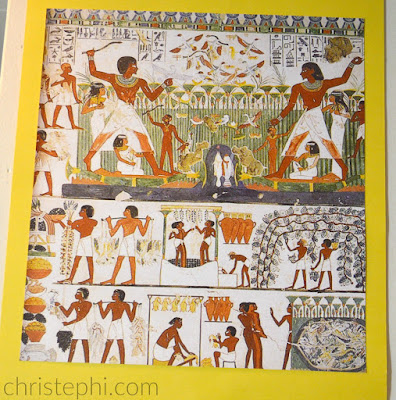 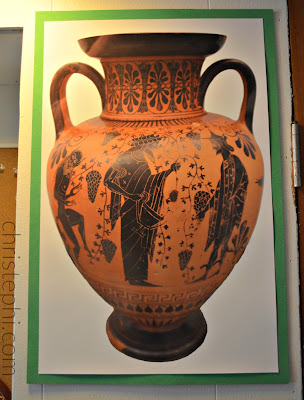 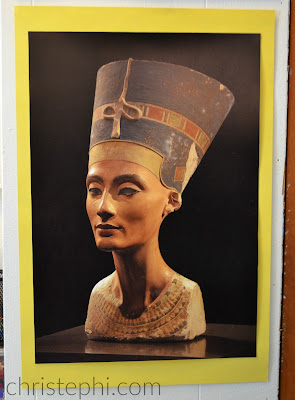 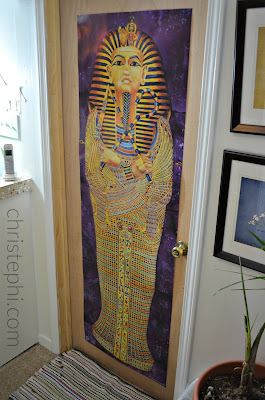 I love this mummy poster!  I was worried it would feel spooky to have it staring at us from the door like that, but it doesn't at all. It's bright and colorful and exotic looking. It was the most expensive decor item I splurged on, but I didn't feel bad because of the great deal I got on my other posters! I got it from Amazon.

So that's our basement! It's where we school during the day and hang out together as a family in the evenings. It's not posh or even particularly large, but we love it and we are so thankful for it! 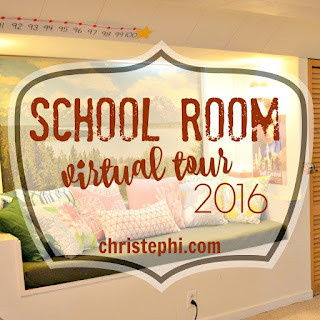 Posted by Christephi at 9:43 PM

Email ThisBlogThis!Share to TwitterShare to FacebookShare to Pinterest
Labels: Creation to the Greeks, homeschool, My Father's World, school room, tour