Creation to the Greeks: Week 4

Monday morning came and none of us wanted to get up. It was cold outside. And the blankets were so warm and cozy.  So we started off our day with some reading in bed! 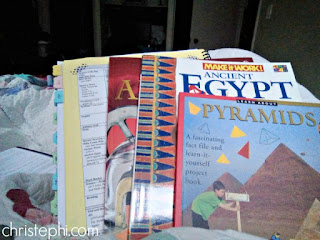 Once we finally moseyed on downstairs, Miss M built a couple pyramids -- a triangular-base pyramid and this square-base pyramid. 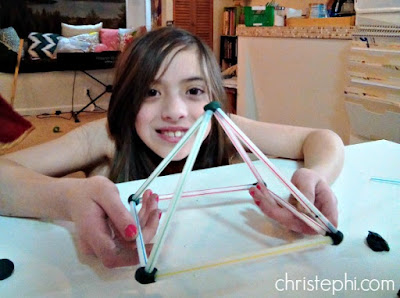 Not to be left out, Mister E also built a pyramid, only his was done in Minecraft.  The thing I love best about this is that even though we talked about the Great Pyramids of Egypt being built on a square base, Mister E didn't really get that until he tried building one of his own. He figured out through trial and error that you can't build a "perfect pyramid" with a rectangular base. It must be square. 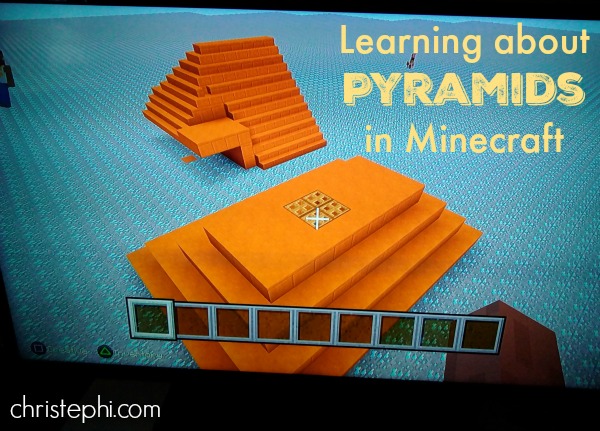 We read about Menes uniting Upper and Lower Egypt into one kingdom and the kids put on a little reenactment.  I made the red and white crowns, but the rest of their ensembles were entirely their own doing! 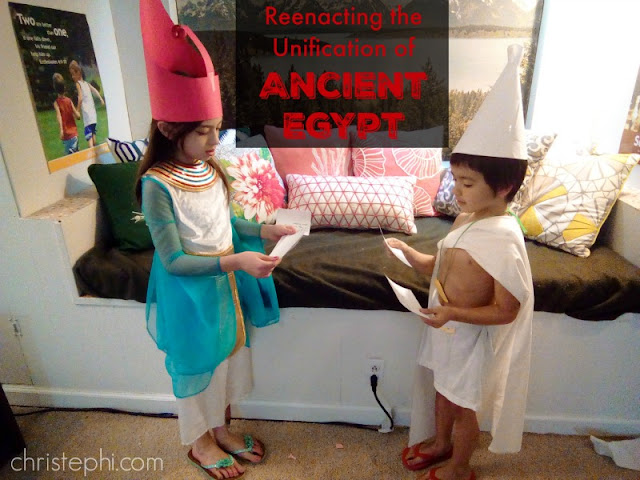 First grade math always looks like fun and games!  I gave Mister E a pile of Unifix cubes in different lengths and he put them in order from smallest to largest. Then his pencil had to "climb the steps." 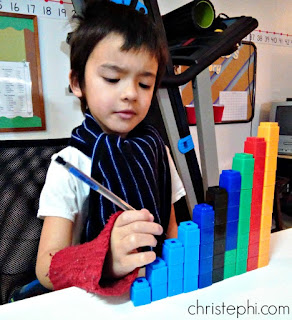 In art, Miss M put to use her line and ellipse practice and drew a sweet little worm named Wally. She also copied Paul Cezanne's quote: "Pleasure must be found in study." 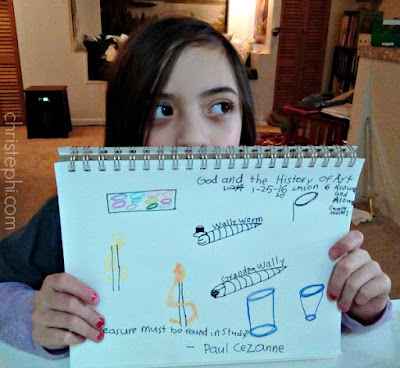 While Miss M was working on her own, Mister E and I skedaddled off to the kitchen to whip up something tasty.  It was Dozen Day and we needed a dozen sweet treats! 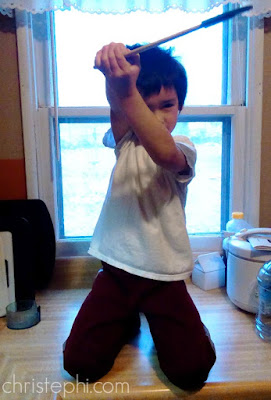 After digging around in the cupboard, we settled on something really quick and easy -- chocolate covered pretzels!  Mister E was able to do this almost entirely by himself. 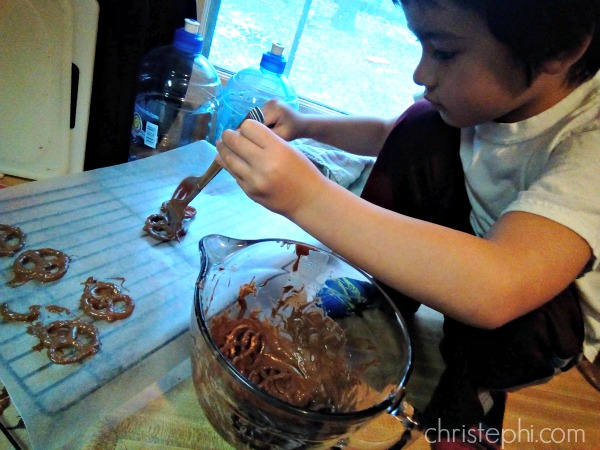 Once the pretzels had cooled, he counted out twelve of them and arranged them on a plate. Then he posed for me and shouted, "ONE DOZEN!" (If you look at the word "dozen" too long it starts to look really strange. Do. Zen. Doz. En. Doze. N. Ahhhh!) 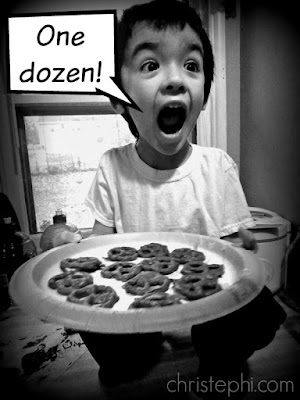 Meet Ibon, Miss M's parakeet. We have had Ibon since before Mister E was born.  Ibon is a grouch. For many years we called him a "he," but it turns out "he" is a "she."  She is a crotchety old thing that doesn't really like people.  But Miss M adores her.  Ever since we moved and Miss M got her own room, Ibon has had her cage in Miss M's room.  Miss M even lets Ibon fly around from time to time. Her constant prattle and love for the bird has finally had an impact and Ibon is now much friendlier than ever before.  This week Ibon came and visited our "classroom."  Miss M was just delighted to have her perching on her finger! 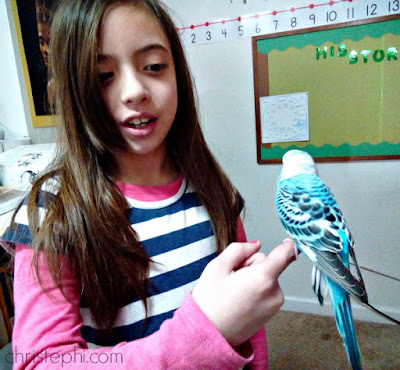 Phonics lessons are not Mister E's favorite, but most days he executes them with a good attitude anyway. 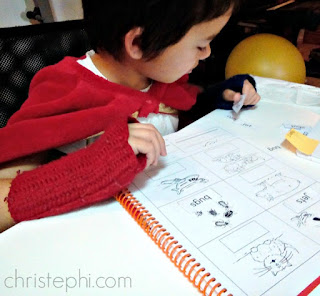 Writing class!  Once a week or so we get together with another family for Writing Strands lessons.  These two girls are peas in a pod and they are always coming up with the most zany, harebrained notions for their assignments. It is never dull!  (I believe in the latest story, Miss M was described as sounding "like a kangaroo in distress.") 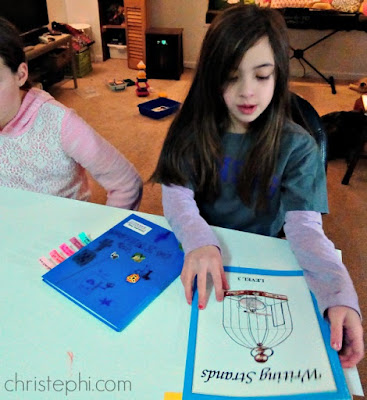 When you are supposed to built a reed boat and it's the middle of winter, there is no tall grass or reeds to be had, what do you do?  You buy a cheap corn broom, that's what!  Disassembling a broom can be quite a mess, but it does turn out a nice replica of an Egyptian reed boat. 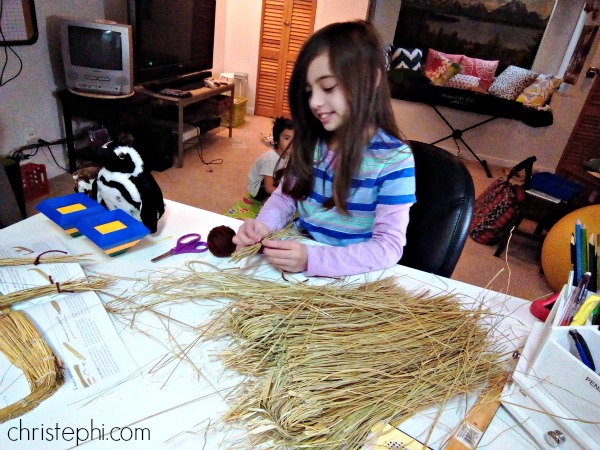 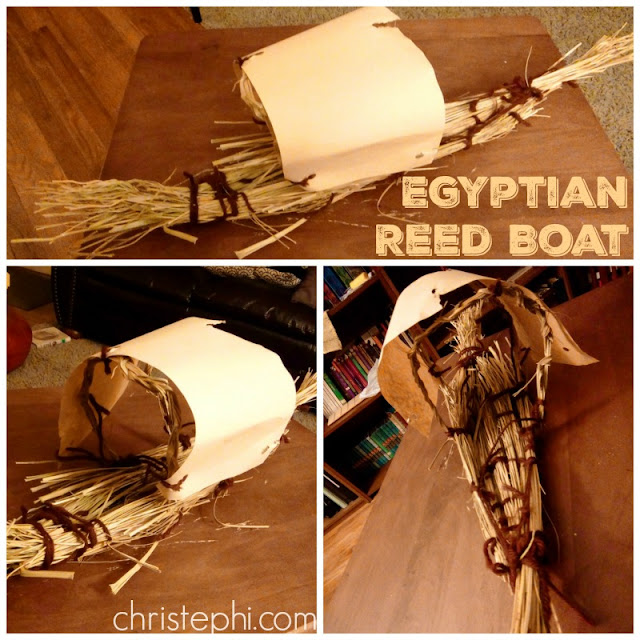 While Miss M was busy building a boat, Mister E was busy exploring the "Egyptian sand."  He built a sand pyramid, buried a poor Lego man and marked him with X, and unearthed a giant scarab beetle.  When he found out this was part of school, he laughed and said, "But it's fun!" 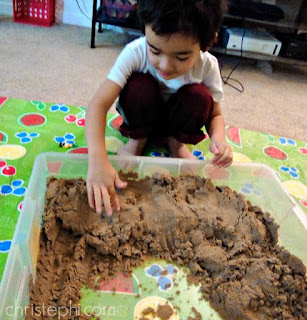 Friday was a rare gorgeous day in the middle of winter. We made the most of it by going outside for some of our lessons, even some of our book work.  Here's Miss M perched atop the picnic table finishing up her math lesson. 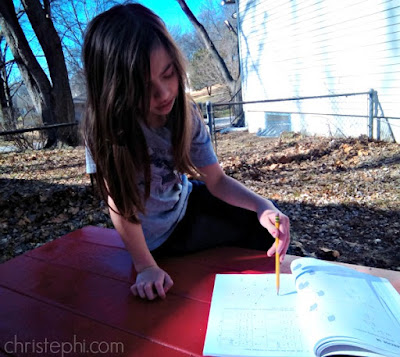 Posted by Christephi at 9:18 PM