The Homeschool Mom's Guide to Minecraft 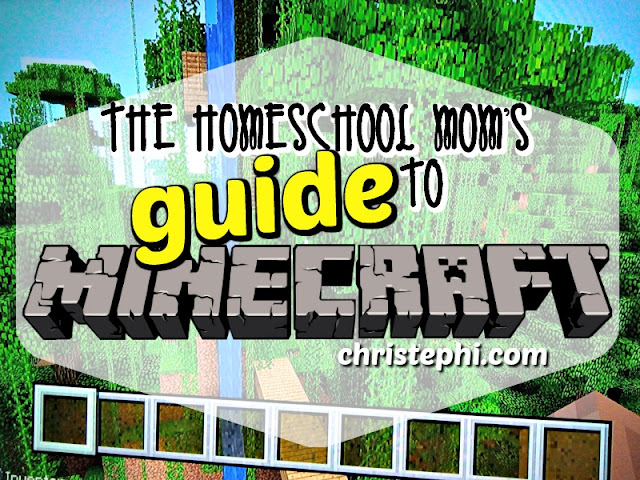 Minecraft. It's everywhere. You've seen it advertised. You've heard of people playing it. But what exactly is Minecraft and how can it be used in your homeschool?  Is there violence?  What age is it appropriate for?  In what way is it educational?

At its most basic Minecraft is an open world of unlimited building blocks, essentially an unlimited supply of digital LEGO.  You play the game as Steve in a world consisting entirely of blocks: block trees, block mountains, block clouds, even a brilliant block sun.  You interact with your world by breaking (mining) blocks and placing them in any way you wish.  If you mine a tree, you get wood. If you mine the ground, you get different dirt or sand or stone, etc.  If you keep going you may find some more desirable items such as coal, iron, or even diamonds and emeralds.  These raw materials can be used to build or combined and crafted into new items such as iron ore being smelted into iron ingots which can then be turned into iron tools.  You can also harvest a variety of other items from the world to meet your needs -- melons, wool, chickens, etc.

You can play Minecraft in different ways.


When you start up Minecraft, you will pick between two main modes of play: Survival and Creative.  If you are mainly interested in building or exploring, you will want to choose Creative Mode. In Creative you do not have to gather your materials from your environment.  Instead, you have an unlimited supply of every type of block at your disposal. You merely select what you want from your menu and build to your heart's content.  Monsters may appear, but they are not your enemies in Creative Mode; they will not harm you or your stuff.  There is no need to consider survival needs such as food, sleep, or falling into lava.  This is the most laid back mode of play.
On the other hand, if you prefer a little danger in your game, you can choose to play in Survival Mode.  In this mode you will have to work to survive by gathering materials from your environment, building shelter, and finding sustenance.  There are dangerous creatures that come out at night from which you will have to protect yourself.  Within Survival Mode you can make a few determinations, however, such as choosing the Peaceful setting which eliminates all monsters from your world or on the other extreme selecting the Hardcore setting where if your Steve dies, your entire world will be deleted. (I'll pass on that one! Too much stress!) This mode of play offers the most challenge and opportunity for problem solving.  You can have multiple worlds saved at the same time.

You can play Minecraft on a variety of platforms.


Minecraft is available for PC or Mac, for gaming consoles such as PlayStation or Xbox, and for mobile devices such as smartphones and tablets.  My kids play either on Hubby's PS4 or on their Kindle Fire and Nabi tablets.  There is a cost differential as well as functionality differences. The mobile versions, or Pocket Edition of Minecraft, are somewhat limited compared to their console or computer counterparts.  Currently the PC version is $26.95, the PS4 version is $19.99, and the Pocket Edition for Kindle Fire is $6.99.


You can play Minecraft alone or with others.


Minecraft is a great cooperative game.  You can play in a Minecraft world with other people, either people near you, or strangers on the same game server.  At our house, the only people my kids play with are each other. We do not use any online game servers to play with strangers.  That is not a realm I wish to venture into at this stage.  When my kids play on the PS4 together, they play in split screen.  When they play on their tablets, they can join one another's worlds since they are using the same wifi (if they had friends over with tablets and Minecraft they could join the wifi and play in the same worlds too, but we haven't done that yet).

This is one of the beautiful things about Minecraft. Unlike other types of video games that either isolate kids from those around them or set them in competition with one another, Minecraft facilitates cooperation between my two kids. If they are sitting in the same room playing in the same Minecraft world (whether on their separate tablets or on the same TV screen), there is constant talk between them about what and how to build.  They work together to solve problems or generate and test hypotheses. Oh, sure, there are plenty of sibling squabbles too, but for the most part they get along well together and have a lot of fun doing it.  And it's not just for kids!  Hubby and I can join in and play with them as well.

You can play Minecraft at any age.


If you can use a game controller or a touch screen, you can play Minecraft.  You don't even necessarily have to be able to read, although it does help.  My son has been playing since he was four-and-a-half years old.  Granted, at first all he did was fly around and find new places -- like a beautiful mushroom island.  But now at six he is just as capable at it as his nine-year-old sister.

You can learn a lot through Minecraft.


Minecraft worlds mimic many things in the real world and exposure to them has spurred my children to take note of things in the real world: weather patterns, husbandry, biomes, architecture, and minerals, just to name a few.  My son recently asked what iron ore really looks like, so we pulled out a big fat book of minerals and looked it up.  He was also delighted to find out that mummy's coffins were sometimes inlaid with lapis lazuli because he is familiar with it in Minecraft.

Many, many things have been written about what kids are learning through Minecraft.  I will not attempt to cover all of it. Suffice it to say, I don't think there's a discipline out there that can't be touched on via Minecraft.

Research skills: Minecraft does not come with instructions. Kids have to explore their world and try different things. Then they have to go out in the real world and find out how to do the things they want to do in Minecraft. My daughter has read ever single book our library has on Minecraft. She has devoured whole Minecraft encyclopedias! And she has put her gleaned knowledge to work for her back in her Minecraft world.  Then there's YouTube with its endless tutorials (and need for strict parental guidance).


Coding: kids who wish to code mods for their Minecraft worlds will have to learn JAVA. My kids are very keen to do this, but we do not yet have Minecraft for the computer where this would be most effective. Ah well, they're still young!

I could go on!

You can use Minecraft in your homeschool.

In addition to all this, there are actual homeschool classes set up that you can visit and learn about history, science, social studies, language arts, etc. Look here and here for starters.

You may not like some of the monsters in Minecraft.


So let's talk monsters.  In Survival Mode, monsters like darkness.  They will come out at night or appear in dark mine shafts, or in your house if you fail to light it!  And if you wish to survive, you must fight them or hide from them.  But the monsters are blocky, like everything else in Minecraft, and fights with them are bloodless.  My kids are not the sensitive type -- I don't recall either of them ever suffering a nightmare -- so none of these monsters have posed a concern for me. They're mostly just silly, not scary.  They are challenges to be navigated, not horrors.  Here is a list of monsters and what to expect from them.

You may not appreciate some of the things your kids (ahem, or husband) create.


Since this is an open world and you can do what you like, how you like, you might find some creations better left uncreated.  Just know that anything "boy" that you contend with in every day life will most likely show up in Minecraft.  Fiery diarrhea? Yep.  Green boogers? Yep.  Groin hits? Yep.  Get the picture?  My biggest objection in the area of inappropriate creations was when the kids (with Hubby's participation) created a world called "Suicide City" and killed themselves in every way they could imagine.  They found this to be utterly hilarious.  I was a rather mortified when I found out -- suicide is not a laughing matter -- and requested that world be deleted. They complied and it hasn't been a problem since.  Perhaps I'm a killjoy, but it just didn't seem like something that was a benefit to their spirits.  As with any useful tool, Minecraft can be abused. 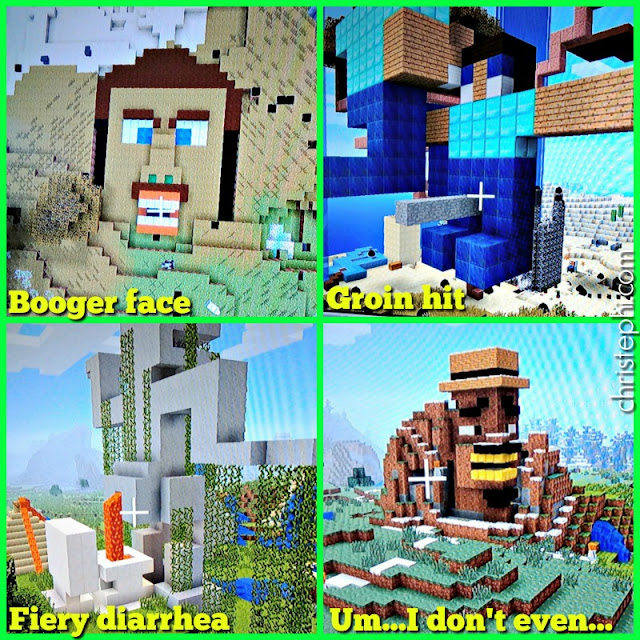 You may not like the Nether or the End.

It is not required to enter the Nether or the End, but they are part of the game. Some parents object to these concepts.  You can read more about them here and here.  I personally have no objection to either of these. They do not scare my children who have never had trouble distinguishing between reality and make-believe.  We had been playing Minecraft for well over a year before they even grew interested in reaching the Nether or the End and their interest in them waned after just a month or two. The vast majority of their time is spent in the Overworld where they display unending creativity and cooperation.

You may get sick to death of Minecraft.

Minecraft can become an obsession even when the kids don't get to play it every day. I got so sick and tired of hearing about Minecraft this and Minecraft that that I banned all Minecraft talk from the dinner table.  Plans of what and how to build, discussions of which materials are best, talk about zombie pigmen and slime blocks might just make you want to scream.  The solution to this is to call for a Minecraft break and direct your children's energies to something else for a while...maybe a long while.

Minecraft isn't going to be suitable for every family, but it's a great resource for many. What are some ways you have incorporated Minecraft into your homeschool?  Please share in the comments below!


***I was not compensated in any way for this writeup.***

Posted by Christephi at 1:49 AM